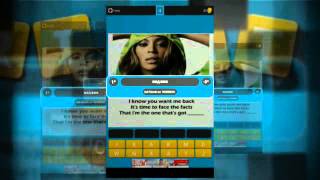 Are you fans of Beyonce? Love her songs? Know all her songs?

Guess the lyrics from Beyonce Songs! Complete the lyrics using scrambled letters.
Challenge yourself (or your friends who claim Beyonce fan) to complete all levels.

How to play:
You can see lyric from Beyonce song and you need to complete it using available scrambled letters. You can earn coins for correct answer. But you will lose coins for wrong answer. Difficult level is varying from easy to hard.

GET HINTS!
Need Help? In case you are stuck, there is nothing to worry about! With coins you earned, you can always get hints by revealing 1 character or removing 3 unused characters. Or even better, ask your friends!
Sent them the question on Facebook directly from the game. Invite your friend to your game.

ABOUT Beyonce: Beyoncé Giselle Knowles-Carter, simply known as Beyoncé, (/biˈjɒnseɪ/ bee-yon-say) (born September 4, 1981) is an American recording artist and actress. Born and raised in Houston, Texas, she performed in various singing and dancing competitions as a child, and rose to fame in the late 1990s as lead singer of R&B girl-group Destiny's Child. Managed by her father Mathew Knowles, the group became one of the world's best-selling girl groups of all time. Their hiatus saw the release of Beyoncé's debut album, Dangerously in Love (2003), which established her as a solo artist worldwide; it sold 11 million copies, earned five Grammy Awards and featured the Billboard number-one singles "Crazy in Love" and "Baby Boy".
Following the disbandment of Destiny's Child in 2005, she released her second solo album, B'Day (2006), which contained hits "Déjà Vu", "Irreplaceable" and "Beautiful Liar". Beyoncé also ventured into acting, with a Golden Globe-nominated performance in Dreamgirls (2006), and starring roles in The Pink Panther (2006) and Obsessed (2009). Her marriage to rapper Jay-Z and portrayal of Etta James in Cadillac Records (2008) influenced her third album, I Am... Sasha Fierce (2008), which saw the birth of her alter-ego Sasha Fierce and earned a record-setting six Grammy Awards in 2010, including Song of the Year for "Single Ladies (Put a Ring on It)". Beyoncé took a hiatus from music in 2010 and took over management of her career; 4 (2011) was subsequently mellower in tone, exploring 1970s funk, 1980s pop, and 1990s soul.[5] Her fifth studio album, Beyoncé (2013), was critically acclaimed and was distinguished from previous releases by its experimental production and exploration of darker themes.

This is a fan-made app and no copyright infringement intended. All pictures and lyrics are property and copyright of their owners.

well, there's this guy, he jumps.

NO CR RESTRICTION ON LITE VERSION!!! The LITE version (100 % Free) allows you to simulate the Combat Rating of 1 armor. DC Universe Online game App specific for PVE mode. With DCUO CR Calculator it is possible to know where and how to invest your play time more efficiently , with the goal of achieving the highest levels much faster. The applicati…

It a collection of some tricks and few shortcut keys which enhance your productivity. Download the "Facebook Smart Tricks" app ,those tricks that can help you using Facebook more efficiently. Disclaimer: Facebook is a product of "Facebook Inc". This is an independent app and is not endorsed by "Facebook Inc". Keyword…