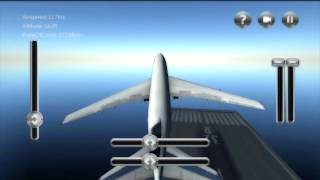 - Optimized APK size
- Optimized performance, some textures have been reduced to cover more devices game can be playable on.

NO ANNOYING BANNERS AND NO ANY IN-APP PURCHASES, JUST GET THIS SIMULATOR AND ENJOY FLYING BOEING 747.

Feel yourself like a real Boeing airliner pilot, feel how it’s hard to control the plane - the Flight Simulator supports full realism means real airplane and world physics and sounds.

Boeing Flight Simulator game divided by mission, in order to start new mission you need to complete the previous one. Some missions includes free flight all missions includes realistic control (very hard). In order to move forward on missions take a time to train yourself to fully control plane - take off, flight, landing, hard conditions etc. Remember that Boeing is a very heavy airliner and it’s very sluggish. It takes times and to become a real world pilot. And bear in mind - it costs nothing to crash a plane in the Boeing Flight Simulator, but not in the real world.

In the Boeing Flight Simulator you are flying on the legendary Boeing 747, game fully simulate Boeing 747 and how it flies. Boeing 747 is a commercial airliner often called Jumbo Jet. Boeing 747 is among the fastest airliners with a high-subsonic cruise speed up to 920 km/h.

Enjoy your flights and become a good Boeing 747 pilot with our Flight Simulator.

ReadAssist is an android application which aids users to discover what a piece of text says and means. It can successfully help both someone who has poor eyesight or someone who is struggling with the text due to the language. The product was designed as an android application to run on tablets and smartphones running android 4.0 or over. It is b…

Guess a specific part of Quote about Walt Disney Frozen movie! Remember the dialogue, script, scene, character name and all the thing which are in the film. You are a true fan if you complete this game! It is a game based on the popular game Guess The Pic, Guess The Number and Guess The Word. This is the best guess quiz for Frozen Fans. Playing i…