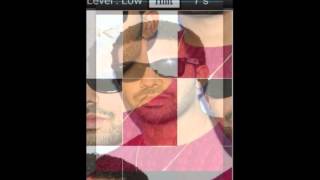 This is a puzzle game for Drake Fans. In this game you will find some of image with random image.
Its a jigsaw puzzle application. It also give you awesome gallery.
By this gallery you can save image into gallery or set as a wallpaper
Its a very simple app any body can use it

Aubrey Drake Graham (born October 24, 1986), who records under the mononym Drake, is a Canadian recording artist, rapper, songwriter, and actor. He was born in Toronto, Ontario.[1] He first garnered recognition for his role as Jimmy Brooks on the television series Degrassi: The Next Generation. He later rose to prominence as a rapper, releasing several mixtapes like Room for Improvement before signing to Lil Wayne's Young Money Entertainment in June 2009.[2]

Drake's EP, So Far Gone (2009), spawned the hit single "Best I Ever Had" and the moderate hit "Successful". His first studio album, Thank Me Later (2010), debuted at number one on the Billboard 200[3] and generated notable singles, "Over" and "Find Your Love". It was certified Platinum by the Recording Industry Association of America (RIAA). His second album, Take Care (2011), is his most successful to date, topping charts in the United States and Canada and producing multiple hit singles, including "Headlines", "Take Care", "Make Me Proud", and "The Motto", the last of which is also credited for popularizing the widely used acronym YOLO. In promotion of Take Care, Drake embarked on the worldwide Club Paradise Tour, which became the most successful hip-hop tour of 2012, grossing over $42 million.[4] His third studio album Nothing Was the Same was released on September 24, 2013. It has so far been supported by the singles "Started from the Bottom" and "Hold On, We're Going Home".

Drake has sold over 5 million albums worldwide.[5] His work has earned him a Grammy Award, three Juno Awards, six BET Awards, and set several significant Billboard records. With twelve number-one singles, Drake has more than any other artist on Billboard's Hot Rap Songs chart. With ten number-one singles, he also has more than any other rapper on Billboard's Hot R&B/Hip-Hop Songs chart, passing Jay-Z in August 2012.[6] He is one of two artists (the other being 50 Cent) that has simultaneously occupied the chart's top three positions.

Drake, along with being a record producer under the pseudonym C. Papi, has also written songs for other artists, including Alicia Keys and Jamie Foxx and Trey Songz. He featured as a voice actor in Ice Age: Continental Drift as the mammoth Ethan.[7] Drake was tied with Rihanna for the most nominations at the 2012 MTV Video Music Awards.[8] He was ranked No. 2 on MTV's Hottest MCs in the Game VII list in 2012.[9] Drake became the #1 Rhythmic artist of 2012 based on Mediabase.[10]

Psychology is an academic and applied discipline that involves the scientific study of mental functions and behaviors.[1][2] Psychology has the immediate goal of understanding individuals and groups by both establishing general principles and researching specific cases,[3][4] and by many accounts it ultimately aims to benefit society.[5][6] In this…

Internal auditing is an independent, objective assurance and consulting activity designed to add value and improve an organization's operations. It helps an organization accomplish its objectives by bringing a systematic, disciplined approach to evaluate and improve the effectiveness of risk management, control, and governance processes. Intern…