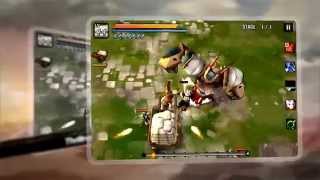 Endless action-packed battles against dreadful warriors from the dead
Invite your friends and fight to be the Extreme Undead Slayer!

--Undead Slayer Extreme!--
Fight against the undead in a historical battlefield
All the infamous villains from the Chinese dynasty are ready to take action. Only the chosen one can slay the zombie warriors and reconstruct the fallen kingdom.

--Change heroes during battles with the unique 'Tag System'--
Promote Generals and play as another hero when you're in trouble.
Generals take action with original weapons and skills that include bows and arrows, spears, fans, double swords, qigong, axes, and more!

--Character Development System--
Many types of character improvements such as weapon enhancements, skill upgrades, and training.

--Social Features and Leaderboard--
Double the fun by inviting friends from Facebook and compete with them for the top position in the ranking chart!

--1 Developer Does It All?--
Graphics, illustration, game design and coding...all done by 1 person!

The little puppy got tired of the country life and decided to visit The City! He is very excited and can`t stop running! Help the puppy avoid obstacles! Enjoy this exciting, fast - paced running game, featuring an incredibly cute puppy. Use your reflexes to make the puppy jump, and keep him out of harm`s way! Are you up for the challenge? Find ou…

IPConfig - What is My IP?

QasidasApp is a tutorial that teaches the poems written by Cheikh Ahmadu Bamba, the founder of muridism. This is a free demo version for those who want to discover this app. This app allows you to learn a simple and gradual at your own pace the famous qasidas of Khadimou Rassul. Whatever your age or level of study you are mouride or not, if you wan…

This is the official app of Karim Nafatni, an Airline Captain and photography enthusiast. He seriously got into the Art when he got his first DSLR back in 2010. Addicted to height and fan of architecture, he climbs the highest skyscrapers of Dubai to take his pictures ,sometimes more than 300 meters above ground. As the top of the biggest building…

It's a game to survive yourself (first person). From a temple, some stones will be thrown continuously to the player. The player will have to move left or right to avoid those stones pressing the left-right button. If a stone hits the player, he/she will die. The score will show you total survival time in seconds.

Do you love Jessie? If so, download Jessie FanAppIma today! FEATURES * Jessie Fan Chat - interact with other fans * Watch the hottest videos * Stay updated with the latest news on Jessie * Join the monthly poll on Fan Question * Battle with other fan-base in the Fan Battle * Checkout the latest #JessieNation Instagram Photos and Wallpaper * Get u…