TiKL is an app that works as a Walkie Talkie. You can call your Facebook and phone contacts free and fast

It has to be said that TiKL doesn't use voice minutes or SMS for calls or chats. It works over WiFi, 3G, 4G, EDGE and GPRS. That's what makes it completely free (data connection only). The only condition is that your contacts must have this app installed in their phone or tablet. It works across Android phones/tablets and iOS devices.

You can have instant real-time one-on-one and group voice push-to-talk calls. Just need to select the contacts you want to call and then tap on the central button. That easy.

What's more, you will be able to send one-on-one or group instant text messaging with delivery confirmation.

Its strong point is that it supports both phone contacts and Facebook friends. Its main catch is that your contacts need to have it installed to receive your push-to-talk calls. Anyway, there are other apps in the market to give free calls that doesn't sound like a Walkie Talkie. That's it, if you want to give and receive high quality free calls this is not the best app. Its great to play war for a while exchanging "rogers" with your friends, but annoying if you concern serious calls.

TiKL has been developed by TiKL, Inc, an emerging developer who has just launched this app in the market with remarkably success.

If you want to play Walkie Talkie, TiKL is your app. Spread the voice among your friends that they should install it and you all will enjoy one-on-one and group free calls PTT-like. We think that this app it's good to try, but it's far from a must have.

Instantly speak to or text one or many friends at once with the touch of a button. No setup needed, just have them in your address book or as Facebook friends. Fast and simple - TiKL turns your phone into the ultimate Push To Talk (PTT) Walkie Talkie with instant messenger capability.

Quick one-on-one/group voice push-to-talk calls.
Lightning fast chat with delivery confirmation.
Uses data connection only. No voice minutes or SMS used for TiKL calls or chats.
Works across carriers and Android/iPhone/iPad/iPod Touch.
Connects on WiFi, 3G, 4G, EDGE and GPRS.
Create widgets by long pressing any blank space on your home screen.
What if their device is off? No worries. TiKL automatically delivers your messages the moment it is turned on.

To ensure that you do not miss any incoming TiKL calls or chats, please launch the app at least once after installing/upgrading it.

If things don't work after updating, please uninstall and reinstall.

CB Radio Chat is a free entertaining live voice communicator/messenger with people around the world at high audio quality. Simply touch the blue button, talk to your friends and make new ones like with walkie talkie and Push To Talk (PTT). CB Radio Chat requires the Internet connection (WiFi, 3G, 4G, EDGE or GPRS) for audio transmission, (max 11MB…

Zello Walkie Talkie LoudTalks turns your Android device into a walkie talkie. The unexpected success of push messenger apps cleared the way to the emergence of other related apps. Zello is a push-to-talk app, which is something that sounds groundbreaking. However it's based on an old gadget: walkie talkies. Thanks to mobile devices, walkie talkies….

Are you looking for the New Way to Talk? Here is the answer. Meet TTtalk a Walkie-Talkie app that will allow you to use instant text messaging and share multimedia. Enjoy quick back and forth voice messaging in real time. You can also save time compared to making calls or using SMS. Use emoticons, stickers and audiocons(voice emoticon) to let you…

A new messaging and caller app. Free Phone Calls, Free Texting is a new communication application that allows you to talk and send messages and files with other users. After registering, you will be able to begin conversations with your contacts and even those who're not using the application (of course, that is not for free). There are over 200 co….

Voxer Walkie Talkie is a free app that combines the best of Live Voice, text, photos, and videos into a powerful secure messaging tool. Voxer is the only walkie talkie messenger with end-to-end encryption. ------- Make your group communication more efficient, secure and personal with Voxer. Why millions of people choose Voxer: * Live Audio - In… 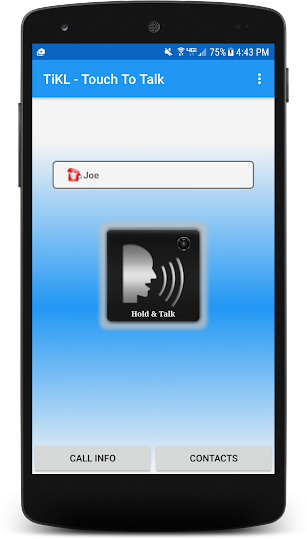 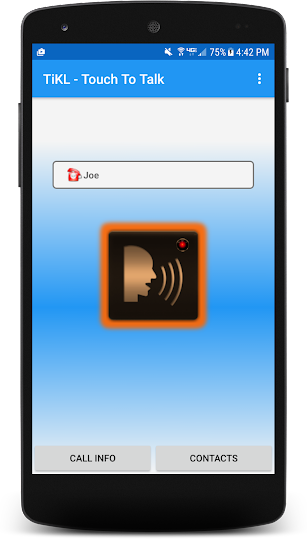 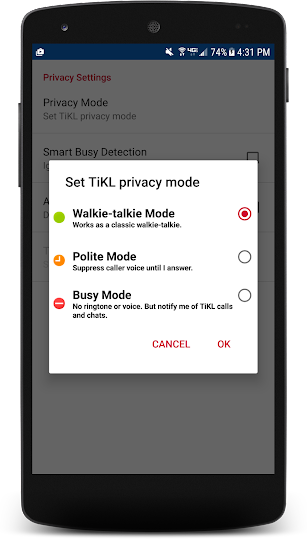