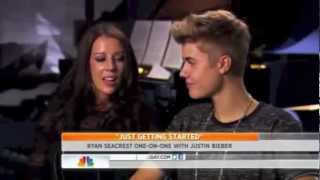 In September 2012, Bieber vomited dairy on stage while performing a concert in Arizona. The incident was captured on video and spread quickly around the internet. He blamed drinking milk for the incident, stating on his Twitter, "Milk was a bad choice!" Mentor Usher has urged Bieber to follow him in a vegan diet for health reasons. He stated that he wanted the young artist to have more energy while on tour.

Bieber made comments in a February 2011 profile in Rolling Stone. Asked about abstinence, Bieber responded, "I don't think you should have sex with anyone unless you love them." He said he does not "believe in abortion" and that it is "like killing a baby".He described sexual orientation as "everyone's own decision".Bieber has contributed to the It Gets Better Project,which aims to prevent suicide among LGBT youth.

Bieber has said he is not interested in obtaining United States citizenship and has criticized America's health care system. Praising Canada as being "the best country in the world", he cited its health care system as a model example.

DISCLAIMER:
This is NOT an official but a fan made app. All the logos, trademarks and sources are the properties of their respective owners. We do not endorse in hosting or supporting the channel. If there is any issue, kindly send us an email with full details
The content provided in this app is hosted by YouTube and is available in public domain. We do not upload any videos to YouTube. This app is just an organized way to browse and view these YouTube Videos to make it convenient for you, to watch videos,photo and news without browsing in YouTube,flickr and any search engine.

911 Shifts is free for the first three months. After 3 months some functions will not work unless you purchase the full version. 911 Shifts is a scheduling app for Law Enforcement, Corrections, Emergency Services, Firefighters, Security, all the other Protection Services or anyone who works shift work. Made for the people who serve our community 24…

Brand new Mini Launcher owns abundant of amazing themes , which you have an unprecedented delightful experience . It’s applicable for Android 4.0 and above , also a highly personalized launcher that you’re worth it . Mini Launcher is only 4MB . It's much smaller , and saves more memory usage for your phone . What can Mini Launcher do for you…

The "Officially Unofficial" Naples High School Band application. It allows you to look at the band's calendar, donate to the band, and contact the band via the website, Facebook, or Twitter! Greg Willard maily maintains this application and will update it as constantly as it needs. The source is available at http://www.github.com/r3p…