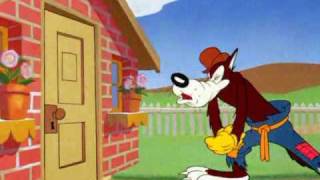 Looney Tunes is a Warner Bros. series of animated short films. It was produced from 1930 to 1969 during the Golden age of American animation, alongside its sister series, Merrie Melodies. Looney Tunes originally showcased Warner-owned musical compositions through the adventures of cartoon characters such as Bosko and Buddy.

The characters themselves are commonly referred to as the "Looney Tunes" (often misspelled, intentionally or not, as "Looney Toons"). The name Looney Tunes is a variation on Silly Symphonies, the name of Walt Disney's concurrent series of music-based cartoon shorts. From 1942 until 1969, Looney Tunes and Merrie Melodies were the most popular cartoon shorts in movie theaters, exceeding Disney and other popular competitors

Since its first official release, 1930's Sinkin' in the Bathtub, Looney Tunes has become a worldwide media franchise, spawning several television series, films, comics, music albums, video games and amusement park rides. Many of the characters have made and continue to make cameo appearances in various other television shows, films and advertisements.

The most popular Looney Tunes character, Bugs Bunny, is regarded as a cultural icon and has appeared in more films than any other cartoon character. Several Looney Tunes shorts are regarded as some of the greatest animated cartoons of all time. Many of the shorts were nominated for the Academy Award for Best Animated Short Film, with two of them winning the award (For Scent-imental Reasons and Knighty Knight Bugs), and the short Porky in Wackyland has been inducted into the National Film Registry of the Library of Congress.

n the beginning both Looney Tunes and Merrie Melodies drew their storylines from Warner's vast music library. From 1934 to 1943, Merrie Melodies were produced in color and Looney Tunes in black and white. After 1943, however, both series were produced in color and became virtually indistinguishable, with the only stylistic difference being in the variation between the opening theme music and titles.

Both series also made use of the various Warner Bros. cartoon characters. By 1937, the theme music for Looney Tunes was "The Merry-Go-Round Broke Down" by Cliff Friend and Dave Franklin; the theme music for Merrie Melodies was an adaptation of "Merrily We Roll Along" by Charles Tobias, Murray Mencher and Eddie Cantor.

In 1929, WB became interested in developing a series of musical animated shorts to promote their music. They had recently acquired the ownership of Brunswick Records along with four music publishers for US $28 million. Consequently, they were eager to start promoting this material to cash in on the sales of sheet music and phonograph records.

Warner made a deal with Leon Schlesinger to produce cartoons for WB. Schlesinger hired Rudolph Ising and Hugh Harman to produce their first series of cartoons. Bosko was Looney Tunes' first major lead character, debuting in the short Bosko, The Talk-Ink Kid in 1929. The first Looney Tunes short was Sinkin' in the Bathtub which was released in 1930.

The content provided in this application is hosted on YouTube and is available in the public domain.

We have not uploaded any videos to Youtube. This application is just an organized way to browse and view YouTube videos in another way.

This app is unofficial and is simply a shortcut to the information offered by YouTube.

For More Great Free Apps Visit Our Google Playstore By Going To GingerbreadWebApps.com

Selling books is the option where you can sell your own hand scripted books,. This is one of the phenomenal options through which the writers of the new age can sell their works without any issues. The selling options can be many. There are many sites in the online that gives this options. But while searching for the righ platform to sell your work…

The dealership of the used car is one of the tough things to have. f you are planning o open a used car dealerships store then you have to go through some of the details and snobs that will require some evidence and strong grounds. Though, to purchase used car dealerships is huge profitable business. You can become a middle man and at the same time…

Apple: Think Different. Here we collected a set of Iphone theme ringtone, Iphone4, Iphone4S, Iphone5. Downloaded it and set as ringtone, make your phone has a Iphone style!