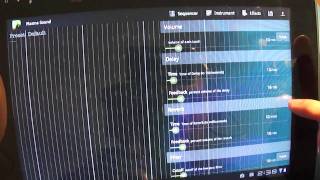 [Plasma Sound HD and Plasma Sound are now officially the same application. There is no difference whatsoever.]
Plasma Sound is the most fully-featured and 100% free music instrument on the Android Marketplace!

Beautiful music instrument inspired by the Theremin, Continuum, Keyboard and Sequencer. Touch the screen and a note is generated. It's X-Axis (left-to-right) is pitch, which is designated by note and octave markings. It's Y-Axis (up-and-down) is up to you to control! Plasma Sound is incredibly configurable. Pick the note range, the waveform, cutoff, delay, tremolo, vibrato and more! You can even select between continuous mode (theremin-like), quantize mode (keyboard-like), and a hybrid.

Plasma Sound applies the same principals to the Sequencer to give you even more music creation abilities! Select a note to activate it, and drag up and down to select it's Y-value, controlling the same thing that the Y-Axis controls in the Keyboard section. Immediately you get an incredibly dynamic and versatile sequencer.

On Android 3.0 tablets and up, a new beta feature has been added: The ability to create and play sequences using the front-facing camera. Select the "Motion" tab to try it out!

This app is known to have problems with older/lower end phones. The original Droid is known to work (just barely), but phones with lower specs will most likely run in to problems. Please don't leave a bad comment if your phone doesn't work; it's an intense app, intended for tablets (although an honest effort is put in to supporting older phones, I promise).

The beautiful visual based off of MSAFluid, and the sound is generated by libpd.

Please let me know of any bugs or errors you encounter! In addition, if you have any feature requests, let me know. Feel free to email me or post on the XDA thread here: http://forum.xda-developers.com/showthread.php?p=17498254 This is my instrument for my band, Shy Guy Says, http://shyguysays.com (check us out!), so I'm incredibly concerned about stability and ease of use!

The source for this program is at: https://github.com/rjmarsan/PlasmaSound

Challenge with your friends. Test your intelligence and your reflexes, improve your QI. - 7 different MiniGames with 3 levels of difficulty. - Challenge between 2 players. - Colorful and great graphics. - Online Score Leaderboards and Achievements by OpenFeint.

Have you ever been sick & tired from something inside you? Or felt guilty because some habit that cannot stop? Or want to improve some good thing inside you? If so, your are in the right place and the right time! Try HabiterLite! Simply HabiterLite helps you to break your bad habits and improve your good habits! Simple idea, simple tool! The…