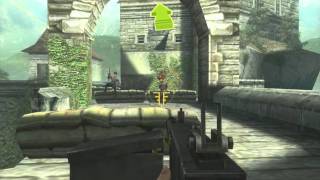 Download APK from previous versions of Brothers In Arms® 2 Free+

"What's the weather like in Normandia at this time of year?"

Brothers in Arms is one of those games that you either love or hate. Even though graphics are great and gameplay is smoother than most FPSs, be forewarned of its freemium formula because it might be a point when you would have preferred to pay for the entire game. It's a pity that such a great game be so frustrating. If you fail a mission, there'd be a cool down time to retry it unless you pay with the in-game currency - dogtags. If you feel that your rifle had enough trouble at the 1st WW and doesn't deserve to play its part on the 2nd -in other words, if you're tired of needing three shots to gun down an enemy soldier- you can buy far better weapons in the shop...in exchange for your valuable dogtags, of course, which are quite hard to earn and you would prefer to trade them for first aid kits or ammo. Once you leave the game, the war continues on its own in the form of notifications in your status war.

Of course, you can put real money on the table in order to get a bunch of dogtags in question. That's how freemium games work, but there should be a midway (pardon WW2 pun) between humiliating the player and wheedle him out. In exchange, just in case we weren't clear enough, graphics are great but not the greatest; gameplay is smooth and there are 5 languages supported.

Don't forget there's an initial additional downloading of 250 Mb, so look for a wifi and a quarter of hour or so of spare time. Great option if you don't feel comfortable paying for Modern Combat 3 or if you prefer WW2 settings instead of contemporary warfare. You know, it's free, so why don't give it a go? You'll always be in time to pick up any other Gameloft game later.

Now you can play the highly acclaimed Brothers in Arms series for FREE! Prepare to step onto the most intense and explosive battlefields of WWII.

PLAY FOR FREE
Download the game and start playing for free in Story mode or Multiplayer. Earn Dog Tags and XP as you play that can be used to unlock tons of extra features and gear to customize your soldier, or purchase Medals to unlock them faster. It’s up to you!

JOIN YOUR ALLIES ONLINE
Challenge up to 5 friends to multiplayer battles on five maps in 3 different modes (Free For All, Team Deathmatch and Domination). You can connect locally via Bluetooth or even go online with Wi-Fi to battle friends anywhere.
A FIGHT ACROSS THE GLOBE
Experience every front of the war with 50 missions to unlock across 5 locations: the Pacific, Normandy, North Africa, Germany and Sicily.

WAR MACHINES
Take control of 3 different vehicles including the tank, off-road vehicle or glider to overrun your opponents or to make a daring escape. You can even jump behind the vehicle turret to lay waste to foes with the machine gun.

THE BATTLE COMES TO LIFE
The stunning graphics and authentic settings are inspired by real-life battlefields from WWII and created in detailed 3D.

AN EPIC EXPERIENCE
Witness compelling cinematic moments with more interaction between you and your squad members that deepens the gameplay.

AN ARSENAL AT YOUR DISPOSAL
Grab a wide variety of historically accurate weapons including machine guns, bazookas, sniper rifles and flamethrowers.

Visit our homepage at www.gameloft.com.
Follow us on Twitter at http://twitter.com/gameloft or like us on Facebook at http://facebook.com/gameloft to get more info about all our upcoming titles.
Check out our videos and game trailers on www.youtube.com/gameloft.
Discover our blog at http://blog.gameloft.com/ for the inside scoop on everything Gameloft.

A 3D active defense game. Regarding what we usually call "active defense games", this is, games in which we must defend a position by shooting at incoming enemies instead of typical defense games where you only build defenses and enjoy the show, it should be said that they were quite stuck as a genre. Fortunately, here's Hills of Glory 3D, the game….