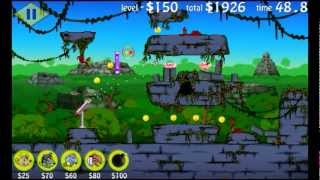 Throw the mice and feed the snakes

Lazy Snakes is an Angry Bird-ish game where your goal is to feed all snakes so as to complete the level. How to play? Just pull the mouse back and release it so it can fly and get to the snake's mouth.

As the game advances, there will be more snakes to feed, they will be in harder locations and you will have more types of mice or even bombs to aim. As a đresult it will be a challenge to finish quickly. To help you, there are two game modes: Time is money, where you need to feed them within the given time and Take It easy, where you don't need to worry about the time. You have plenty of levels to play, more than 40 in each mode.

The graphics are great and so is the usability. The controls are smooth and there are no apparent bugs so it's more than a decent game. Its entertainment is undeniable and it's also pretty hard to stop playing. The two modes are wise moves, as you can play it while relaxing or when you want to challenge yourself.

Primadawn is the creator of Lazy Snakes and its demo version. We hope more levels are added in the future and other similar games are created. Recommended for the boring moments.

.
These snakes are not dangerous or aggressive they are just really lazy!
Help feed them, overcoming a variety of obstacles that will require a bit of thinking and creativity and is a lot of fun for all ages.

★ Feed all the snakes to complete a level.

★★★ If you have any question, suggestion or comment, please email us to support@primadawn.com, we would love to hear from you!

★★★★★ AppsZoom Review - "Great app" - 4/5
"The graphics are great and so is the usability. Its entertainment is undeniable and it's also pretty hard to stop playing. The two modes are wise moves, as you can play it while relaxing or when you want to challenge yourself."
You can read the full review here:
http://www.appszoom.com/android_games/brain_puzzle/lazy-snakes_bvoot.html

Get the lazy boy in front of the tv... feed him all the food you can!. Lazy Boy is a physic-based platformer in which the objective is to launch the food from chair to chair, battle it and get to the TV. How to control the characters? Press and drag them, release them to launch and use the arrows to move right or left; pinch on the screen to zoom.….

Speed Dial allows you to set a fast access to your most-called contacts. This app is really simple: add as many contacts as you want (well, Lite version is limited to three), and Speed Dial will automatically reorder them the most used contact at the top of the list. This way you'll save time when calling your favorite contacts. Just two taps: laun….

Unofficial App All the Lastest Android News with Android Police on your smartphone or your tablet for FREE. There is NO ADS in the Homepage. Features: - Light App, - No strange permissions, - Auto Synch, - Notifications when a new article is posted. For all your feedback, please use the bugtracker here http://www.kamemmental.fr/app/bugtracker/ (w…

Krome is an app that works along with a Chrome extension to bring mobile notifications to your desktop. Imagine that your are at work. It isn't convenient (and in most cases, not even allowed) checking out your smartphone all the time, to read you notifications. However, there's no way to know if notifications come up are important or not, unless y….

The classic Indian game Snake and Ladder, or Chutes and Ladders is a traditional entertaining game for kids and adults. The Snakes & Ladders game can be played in a single or two-players. The objective of the game is to reach to the top square, avoiding the snakes and using the ladders to make you jump. For the first time you can now build yo…

Check out the presented color and find it afterwards. Color Catcher is a concentration game where the challenge is to differentiate the shade of color. Firstly, you can choose to play the 30 second challenge or the 10 level challenge. What will you need to do? Watch the color presented and remember it, because you'll need to find the very same shad….