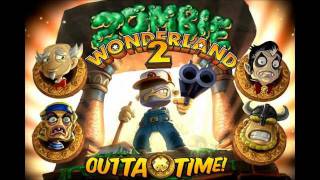 A higher level of originality comes to time management games.

"Moreover, it comes with zombies inside!"

Zombie Wonderland was previewed a few weeks ago, here.

Chuck is a zombie cleaner, which is an upright and honest job, who lives and works in Niceville, a great place to both live and grew in. Unless you mind about zombies, of course.

It's quite hard to explain how Zombie Wonderland 2 works. A grosso modo, it isn't different from a time management game where you have to board up windows, shoot zombies down thanks to Betsy the shotgun and clean all the mess up with a mop instead of refilling shelves and attending customers. If you don't get eaten alive nor lose your brains out you'll be rewarded using the three star rating so in vogue these times according to how much green slime is left around. To cheer all up, there's a hourglass that badly ends the current mission whenever time runs out.

Gameplay is kinda overly dramatic, histrionic if you would, because everything happens very fast, some essential actions as blowing up the head to a passer-by zombie requires one single tap, while reinforcing a window may need up to ten taptaptaptap and zombies are getting near grrrrwl arrrgh and you have to clean everything up splash splurt squirt. Hope you understand. ZW2 is very funny yet it can become hateful very quickly.

Not everything are perks, though. Stage loadings can be a pain, and ads, even when don't interfere in game, require to be online. An other point to fix on next updates is that game should prevent screen from dimming out, so it'd be better if you paid due attention to the game unless you want to find yourself with your device locked, lagged and in the desktop.

Anyway, it doesn't matter how you look, shoot or mop it. Zombie Wonderland 2 was fated to be one of the most fun games all throughout this year and, honestly (as honest as Chuck is) it has meet all the expectations and beyond. And (let it be a biiig AND) it's free from the start to the end. As usual, there are some in-app purchase to boost your prowess, but if you can survive to ads, you should be able to survive to a handful of zombies, shouldn't you?

Xoobis guys may have found pleasure exceeding their own expectations, because they've brought something really big to Android.

Zombie Wonderland 2: Outta Time! is a wild romp into the crazy, zombie-filled universe of Chuck, Niceville’s own Zombie Cleaner, on an quest to rid the town from the undead pests once and for all!

★ Travel back in time with Chuck, and fight through the hordes of undead in this action packed adventure!
★ Pick your anti-zombie arsenal carefully, as there are dozens of wacky weapons to use against the shuffler’s onslaught!
★ 31 Missions, 12 different places to fight, 25 different types of zombies, big and small, to make your life very complicated – fast!
★ Use your cleaning tools to keep your clients happy. Shoot first, then mop the undead’s guts off the floor, or you will pay for the damage!
★ Amazing layered orchestral soundtracks, along with tons of sound effects and elaborate voice-overs, the game delivers an earful in the sounds department!

What the press is saying:

G4 TV: “This is an adrenaline junkie’s dream game: part real-time twitch, part defense, ZW2 puts you in the shoes of Chuck, a “zombie cleaner.”

Kotaku – Gaming App of the Day: “The core gameplay here is proven and joyful.”

Android-Games.com: "I really have nothing bad to say about Zombie Wonderland 2 at all; the graphics, sounds, and voice-overs are all top-notch and the game as a whole is pretty damn awesome."

AndroidZoom: "Xoobis guys may have found pleasure exceeding their own expectations, because they've brought something really big to Android."

AppTudes: "The game exceeds expectations in nearly all respects. Zombie Wonderland2 is a must buy for any and every zombie survival game fan out there."

Touchgen: “The best thing of course about these new areas of the past, are the crazy new enemy types you’ll encounter.”

Unbound Gamer: “I was so hyper playing this game, since each stage you clear unlocks something interesting like new locations and even crazy ammo for your li’l Betsy to engulf and fire.”

Appolicious: “This game is clearly a labor of love from its creators.”

The Washington Times: “Also, pop in the ear buds to hear a chilling musical score from composer Tapani Siirtola that really sets a lighthearted Halloween mood (with a Scooby-Doo vibe) for the supernatural shenanigans.”

§-Shoot dozens of arrows through scores of zombie's brains and reach the new highscore in this new thrilling, addictive, unique survival game! Slay hundreds of zombies, as you fight for your life!-§ §-Addictive Gameplay!-§ §-Epic High Quality Music-§ §-Highscores!-§ §-Tons of zombies, blood, and guts!-§

IT FINALLY HAPPENED! The Dead have risen, and they are hungry for your Braaaaaains! Its up to you to hold off the horde of Ravenous Undead in ZOMBIED, a unique spin on the match-3 touch game. - "Shoot" matching Zombie Heads to score points! - Earn a special "Bomb" item to destroy loads of Zombies! - Two Different Game Mod…

Take back Los Angeles city after the invasion of zombies! The story takes place in the Los Angeles metropolitan area. As a survivor, you need to search for a safe haven away from the shuffling hordes of walking zombies! They want to devour any living thing they catch! Your best friend: your M16 rifle and Shotgun. ★★★★★ "Be aware! This game i…

If you are in a fun of sniping zombies endlessly then this is the game for you!!!! You are on top of the roof and Zombies (World War 2 undead Zombies) are walking around in streets. iSnipe:Z is an extension of "Green Force: Zombies" provides a unique experience of FPS Sniping games and Zombies shooter without compromising on the subtle…

Undead vs Plants is a new cool ricochet shooter game free to download. Not all undead are stupid undeads, this undead smasher uses ricochet kills to end with nasty plants! The rules for this free undead game are simple – aim and fire and hope the bullets will go your way! The bullets bounce off everywhere, try using as less as possible to finish w…

The hordes of blood-thirsty zombies have come in your town. Those undead creatures are back, and it's up to you to clean up the town by blowing away the bloody zombies. This is a new type of zombies defense games. In it, zombirds , witches are flying over you on the broom. You have to shoot them by knife and knock them down. There are three d…