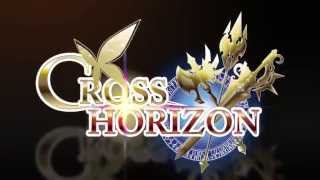 "Let it lovely burn to ashes"

Cross Horizon is a 3D dungeon crawler, set in anime-like graphics, wherein you have to command a team of heroes and roam mazes and beat monsters and loot treasure, you know, the usual stuff. Indeed, it's a well-made game, whose greatest flaw is just its lack of gameplay depth, closer to Disney or Nintendo games rather than actual dungeon crawlers. Anyway, there's no harm in being children friendly.

On the other hand, this game relies too much on luring friends to "help" you, which we all know how annoying it can be. Fortunately, we're given a few new gameplay tweaks such as the forge that allows us to create new weapons and armor.

Concluding: a good game. Hardcore gamers would have preferred a more realistic approach, and younger children won't understand it all, so a good game oriented to a narrow target audience in the end.

Sharpen your sword and gather your friends as you set out on an epic adventure to defeat the Bandit King! Test your mettle against relentless hordes of monsters while collecting massive loot and upgrading your weapons in the Black Market.

REAL TIME, TOUCH-BASED COMBAT
- Combine attacks into deadly combos as you master the skills necessary to defeat your foes
- Learn to anticipate attacks and block them with your shield
- Set off traps, throw enemies down chasms and use every trick at your disposal!

STORY-DRIVEN QUESTING
- Explore the rich world of CROSS HORIZON as you seek to uncover the truth behind the return of the evil Bandit King and the visions of the Dawn Witch.
- Encounter legendary heroes and enlist the help of your friends as you explore dark dungeons in search of answers as to your origin and mission.
- Recover your memory and find aid in the unlikeliest of places as you seek a way to put an end to the Bandit King.

ENDLESS MONSTERS & POWERFUL TREASURES
- Hordes of monsters lurk in the vast wilderness and dark dungeons, guarding powerful treasures that will boost your fortunes.
- Delve deeper and range farther as you seek even greater power – but stock up on supplies, or risk being overwhelmed far from the safety of the castle walls.
- Outfit yourself in magic armor and master the art of sword, axe and spear as you prepare for the final showdown with the Bandit King himself.

FORGE METAL & MAGIC
- Forge weapons and armor into ever stronger creations as you meld metal with black magic.
- Your quest is fraught with danger – arm yourself against the terrors you will face, and overcome all who oppose you.

COMMAND YOUR PARTY
- Enlist the help of friends in your quest to defeat the forces of evil.
- Friends will follow along in your party and lend aid in battle.
- Befriend other players you encounter in your adventures for access to an even greater variety of party members.

Crawl through dungeons, create a party of Idle Heroes to battle monsters for epic loot in an all new style of Idle RPG. Tap to guide your heroes through dungeons, find and evolve new heroes, capture monsters and collect powerful upgrades. See if your heroes can survive Idle Sword 2, an epic clicker/pet battler and retro RPG all in one. This is an…