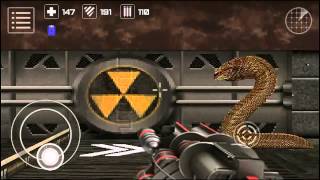 ★ Improved graphics for enemies.
★ Fixed the secrets on some levels.
★ Other bugs fixed.

Gloomy Dungeons 2 is a retro-inspired FPS for Android

Fans of this genre have probably played most-known titles Doom, Duke Nukem or Wolfenstein 3D. They are all considered FPS genesis. Since then the genre has profoundly evolved but there's still some magic on playing classics, with that lovely pixelated retro graphics. Gloomy Dungeons 2: Blood Honor is like a homage to that classics, featuring a dungeon-like mazed stages, old-style graphics and a upgrading system.

Thus, the sequel of Gloomy Dungeon 3D follows its same path but adds new features, levels and units. One of its plus points is its upgrading system where players can enhance weaponry and equipment, unlock levels and get additional features by paying in-app credits. Graphics and animations won't amaze you: bear in mind that this is for nostalgics-kind. However, the game is quite complete regarding settings: you can choose among three different control scheme, including Zeemote. In addition, you can set volume, sound and even smoothing level.

In the second part of Gloomy Dungeons we offer you to become real shooter with sniper rifle or bloody-hands maniac with chainsaw. Target, weapon, shot… are you ready to feel adrenaline in your blood?

Expected by fans this oldschool 3D shooter is already here to give you completely new levels, creepy monsters who dare to taste your blood, pool of weapons to try yourself a real shooter from machine-gunner to rocketeer and several hours of gameplay in dark subway tunnels with special secrets. For all fans of old action games, FPS games (First Person Shooters)! Experience heroic retro battles that have never been seen on your phone and tablet.

Use your sniper skills and agility of real soldier to complete all the episodes. More monsters, more blood, no escape from the dungeons, run to the end, kill everything is moving! Go forward to leave plenty of dead bodies after you. Dive into the most memorable action shooter ever. Experience the ultimate old style action fps with PC quality graphics and sounds.

What’s new in your lovely 3D shooter Gloomy Dungeons 2: Blood Honor
★ Easy and comfortable control: you’ve never played a shooter with such smooth and customizing controls.
★ Automap with real-time hints.
★ Get “Hands in blood”, “Ultimate ninja”, “I see dead monsters” and other achievements.
★ Choose your level: from easy to nightmare to train your shooting skills.
★ New better graphics, shadows, texture and music.
★ New weapons (chainsaw/guns/rifles/rocket launcher) and monsters.
★ Global map and level progress. Check out how many dead monsters you have in total.
★ Graphics optimized for low and hi-res display such as Samsung Galaxy S4 or Samsung Galaxy Note
★ Support for Zeemote and Nyko PlayPad (controller setup required).
★ Lead your character to the top of the online leaderboards with a new ranking system!

Along with the game you receive Live Wallpaper with Gloomy Dungeons on your screen. Endless run in the dark subway to enjoy your favorite 3D shooter all the time.

TO USE: Home -> Settings -> Live Wallpapers

★ Thank you all for the wonderful comments!
This game will run on Android 2.2 and higher.
(Android hd tablets and low screen devices are supported)

If you have any problems, please contact us:
surr.apps@gmail.com and we will help you directly.