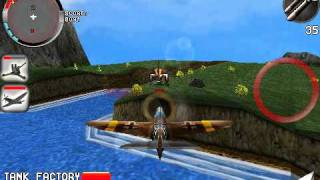 Armaggeddon Squadron is halfway an arcade kind of Afterburner and a plane simulator, perhaps closer to the former but as fun as the latter. In short, it's as easy as taking over a WWII plane (namely what it looks like a P51, though we should ask Polarbit to be sure) and fly over enemy's facilities and bomb them. Controls are easy yet very adequate (tilt to steer and fly up or down, tap on the rightmost of the screen to open fire and select your weapon with the rotating menu at the upper right: bombs to bomb (and change to a high angle view), machine guns to shoot down enemy fighters, and missiles to make stuff blow away, of course. It's as easy to read as fun to be played.

However, user interface is laggy and cumbersome, and hardware sound buttons are unreasonably disabled. When playing you must expect glitches here and there. Don't blame the developer so fast: it's a full 3D game able to run on average devices, so seeing the sky when you crash into a hill is a deal you can bear.

Aaand it's free, so it becomes a quite recommendable game when we compare it to its far more expensive and technically demanding competitors as long as you are not looking for historical rigor.

Armageddon Squadron is an arcade flight simulator giving players the chance to try their wings in some of the best known aircraft of the World War II era in a variety of mission types and environments.

Mission objectives include bombing and strafing raids against facilities and convoys, protection of ground troops against enemy aircraft and, of course, action-packed dogfights against enemy aces. Prepare to unleash an arsenal of machine guns, bombs, rockets and torpedoes above lush, green countrysides, open seas and battle-pocked urban areas.

Modern Army Tactical Bomber a casual game in which you take control of a fighter aircraft. Place yourself in the desert of an enemy country. Your goal is to wreck several building and units in different missions that will drive you to win the war. Of course, as part of the Western armies, you will make it by flying one fighter aircraft full equippe….

Press on into WWII in a bigger, brighter and more action packed adventure! Continue to live the glory as one of the daring air aces battling your way through WWII in full color HD graphics and intuitive touch controls. Help the allied (or Axis) powers to end the war fighting against tanks, troops, aircraft, cannons as well as many more obstacles be…

Interceptor is a vertically scrolling shoot 'em up game. Your mission is to intercept and destroy the enemy aircraft with your advanced F/AX-44 Mk III fighter. Complete each level by destroying the boss aircraft. Steer your aircraft using the touch screen to aim your auto fire and to avoid enemy fire and collisions. If an enemy aircraft is de…

It is World War II, the story takes place in 1942 and you take on the role of "Super Ace", a brave fighter pilot. There are 20 levels to go through and the goal is to reach Tokyo and destroy the entire Japanese air fleet. And before you reach the main city, you will travel through Midway, Marshall, Attu, Rabaul, Leyte, Saipan, Iwo Jima, a…

First of all the game is an arcade with warplanes in which the AERIAL BATTLES are the priority. If you like warplanes, in this game you will find different types of aircraft. • SECOND WORLD WAR. We are in the middle of the MILITARY CONFLICT in the year 1942. The BIG POTENTIALS of the world are faced in two camps: the ALLIES and the AXIS POWERS. He…