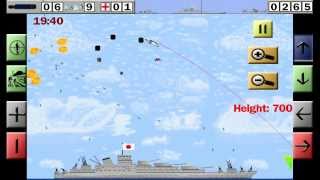 Unleash total destruction with an American dive bomber!
In Fighter Pilot: The Pacific War, you will take command of your SBD Dauntless dive bomber to support your troops, on land, in the air or at sea.
After a devastating blow to the US Navy at Pearl Harbour in World War II, you will take part in the American struggle to defeat the Empire of Japan by fighting in the most important battles of the Pacific War.
To secure the victory of your courageous ground forces, they rely on your initiative and precise bombing attacks to give them the firepower to overcome the enemy. However, anti-aircraft fire and enemy fighters will try stop you at all cost. At the end of the day, only the most skilled and dedicated fighter pilots will be left in the sky.
To prove once and for all that you are best fighter pilot ace in the world you can also upload your battle scores to the international hosted leaderboards. With thousands of active players it will become one intense competition to see who is the best!
All this is and more is waiting for you. Strap in and get ready for the flight of your life!

=== Key Features of the game ===
- Choose from various weapons such as heavy, light or cluster bombs, rockets and torpedoes.
- Enjoy a variety of operations, including fleet to fleet combat, landing and defence battles or sole aircraft dogfights for intense fun.
- Witness powerful battles with over 300 objects fighting at the same time!
- Enjoy an extensive soundtrack while composing a symphony of destruction, with the extra functionality to add your own music to the game soundtrack.
- Compete globally with thousands of other players for the best highscore in each mission
- 4 levels of difficulty to make it interesting to the novice and the toughened veterans

=== What you get in the Unlocked Version ===
* Access to all the 16 missions of the game, plus historical information on the Pacific War.
* The complete soundtrack, a total of 6 different songs, with each being longer than 3 minutes!
* Higher quality graphics
* At least 8+ hours of intense Action

This is the most scary and shocking game. Use this to scare yourself, friends and relatives. This edition have longer level and vibrations. Have fun scaring! ( Prank App )

Lost your PS Vita AR card? Having a hard time always bringing your PS Vita AR card with you? This mobile app is quite handy because you have your phone with you all the time. With this digital version, you won't need to bring your cards to your adhoc sessions or playtime. Multi card mode lets you use up to 6 cards at once in a single phone with…

There is nothing sweeter than little chubby bunnies, kitties, elephants or birds decorating your smartphone screen and wishing you have a great day! Animated pictures in wonderful pastel colors will melt your heart and bring you pure joy and love! This amazing live wallpaper is all you need if you want to show your sincere and delicate feelings.…

Want to train your memory daily with Mobile Game? Try This Game now, and it's more "HARD" FEATURES - There are pairs of image that have to guess - There are different levels - Some Images almost equal so it will be "Harder" - More Fun images This is great game to exercise your memory, Play Now! v1.3: -Bugs fix (Layout). -…

Cars Live Wallpaper offers you the best animated backgrounds of cars you can imagine! Sport cars, racing cars, luxury cars, collector cars…the most powerful motor vehicles you can imagine, all in just one live wallpaper! Super cool cars you’ve been dreaming of can now be background wallpapers on your own phone screen! This new Cars Wallpaper will m…

Capital Events Tradeshow app puts everything at attendees fingertips, stimulates networking and makes it easy to connect, schedule appointments and communicate before, during and after the event. You can: • View agendas and create personal agendas • Access relevant information about the event and destination. • Find and con…

Keep the raindrops from falling on Obama's head. SilvMania Apps' Obama Hates Rain is an absurdist casual game in which you zip around the White House lawn attempting to keep the president dry. Buttons control your left to right movement; you can also swap which hand holds the umbrella. Obama is determined to scoot around the grass at will, so you'l….