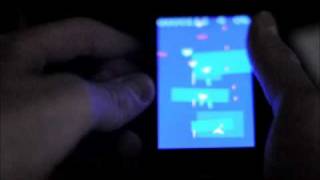 The 80's are back, PAC-Man is Dead. The space invaders have landed, and Galaxian is a distend dream. Recon Shooter will bring back the Atari style fun you all know and love.

In the year 5250 earth has become a dystopian war zone. The skies are filled with a hoard of arcade style space shooters. Lawlessness has become the norm of retro earth.
This is not just any old space game it is a fight for you very survival. With a radiant resolve you must save us, or GAME OVER!!!

Pawn - the Game of Chess

This is a simple, 1-player version of chess. You are playing against the computer. If you can't make a certain move, it means the move is illegal, OR you're in a state of check, and you must move your King to safety first. To reset the game, close and re-open the app. This version works on ALL Android devices.

15 swing, jazz, and blues tunes from composer and conductor Count Basie. Most music was recorded between 1932 - 1940. These are MP3 files downloaded directly to your SD Card. This app is simply a music downloader. It is not a music player. To play the downloaded files, you should use the Android built-in player.

Offers a great overview of the current surf in the North Sea and the atmospheric conditions in the Netherlands. Usable for surf, windsurf, kiting and sailing. Image by Dave Young (see https://www.flickr.com/photos/dcysurfer/) License: https://creativecommons.org/licenses/by/2.0/

A live wallpaper showing moving clouds in the sky. Optional sun, moon and silhouette. An own background image can be set. Highly customizable. *GPS permission for sunset calculation!* *Use App2SD only if wallpaper is deactivated* Problems? Help me and send an email! Ideas and graphics are welcome, simply mail me! FEATURES: * Calculation of sun r…

Make your home screen transparent! FROYO users should uninstall and use Froyo specific version. Never trip up when checking your widgets walking again with this see through wallpaper. Double click on a spare bit of screen to take a picture. Live Wallpaper, Menu on home screen. Wallpaper, Live Wallpaper, select it.

SpeedTraps - BRIEF DESCRIPTION SpeedTraps is a two-way smartphone application for traffic participants equipped with Android, iPhone and Symbian smartphones. The solution can act both as a warning and as an event recording system. In the first mode, SpeedTraps warns drivers of impeding traffic events (e.g. fixed or mobile speedcams, traffic jams,…