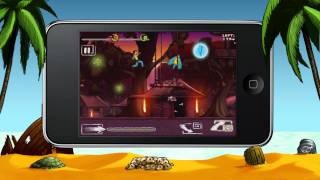 Run Like Hell! is a platformer in which you have to run and jump to avoid get caught

You embody a shipwrecked lost in an Island inhabited by a cannibal tribe. Your purpose is to cross all the Island to reach your boat which is in the other side. The problem: a group of hungry cannibals will make their best to grab you and put you into a saucepan. The only way to survive is running faster than them.

It won't be easy: you'll have to cross different environments like beach, jungle, ruins, village, caverns... And all of them are full of obstacles that you must avoid. Jump, crawl and run faster thanks to adrenaline boosters using the screenpad controls. If you fall down, get up as faster as possible, otherwise cannibals will reach you.

There are three game modes: endless, story and timetrials. The story mode contains over 30 levels in three difficulty modes. The only catch is that you'll have to unlock levels with in-game money (coins) and this will make you replay the same level once and again to collect the needed amount to unlock the next level.

Graphics are simple and cute. Screenpad controls are quite intuitive. In addition, there's a tutorial to learn how it works. You can share your scores on online leaderboards provided by OpenFeint, as well as your achievements and challenges.

A great gameplay with an hilarious plot, graphically attractive and addictive as hell. Highly recommended.

You are an intrepid treasure hunter. Stuck on a godforsaken island with some locals who haven't had a lunch yet! Wanna stay as a main course? No? So... RUN LIKE HELL!

Run Like Hell! is a frantically paced run-and-jump platformer – slide, climb, string, jump and crawl your way to safety as you are pursued by hungry looking savages with spears. Dash through ancient ruins, along nighttime jungle trails and sun-kissed beaches dodging obstacles as you go - every collision brings you a step closer to your doom... and their meal!

• Jump, slide and be precise to perfectly outrun pursuing savages
• Avoid all obstacles which might slow you down, including mad bee hives and angry tribal women
• Send fog or thunderbolts to slow your 'hunters' down
• Additional goal: coins you collect to unlock other levels and additional game modes
• Bonus episodes: YETI, AVALANCHE and HEARTBREAKER included
• Game is absolutely FREE!!!

Free Action Running Game The new infinite run game is here ! Enjoy the adventurous run through the frozen free fall snow jungle. You are A.J.Oscar ,and you are on a daring adventure run through the frozen jungle.During your run you find out some savages are following you to kidnap you or even kill you. You should run for your life or get kidnapped…

This is a speciality trained Army force! They are using the jungle savages as target practice, all with our government's O.K. Your mission is to jump off different obstacles, and you shoot to kill each time. Look for coins and power-ups, and get all the points you can. If you like Call of Duty, Black Ops or other shooter games, download Dark Bl…

Run Like Hell! our beloved brave archaeologist is in trouble once again. After leaving alive an island full of cannibals, our beloved archaeologist has come to Himalayas searching for an ancient artifact. However, what he has found down in the frozen caves is a huge and scaring creature that could be the Yeti. Help the guy to escape from that creat….

Jungle Escapade is a jungle escape adventure top free game full of exciting, daring and fun jungle experiences. John and Jane are treasure hunters and they had a very successful hunt in some pyramid ruins of the Pharaohs in ancient Egypt. They were flying back after loading up their treasure bounty, when their plane had a malfunction and they cras…

Jungle Escapade is a jungle escape adventure game full of exciting, daring and fun experiences. John and Jane are treasure hunters and they had a very successful hunt in some pyramid ruins of the Pharaohs in ancient Egypt. They were flying back after loading up their treasure bounty, when their plane had a malfunction and they crash landed in the…

A 2D sidescroller. Struggle Guy is a 2D sidescroller which, fortunately, seems to redeem from former similar games. First off, because it doesn't have the "endless" label on it, thus letting us enjoy to beat different stages in increasing difficulty. Secondly, because there are no unicorns involved; and lastly because there's been a good level desi….

Help sweet innocent Lucy to run through the dangerous Jungle, desert, city streets and snow city! Our Lucy(a cute squirrel) has been stucked in the dangerous world full of life taking obstacles & hurdles, she's plotting her escape, and she needs YOU to guide her through the streets. Run, jump, dash and slide over around tons of obstacles…