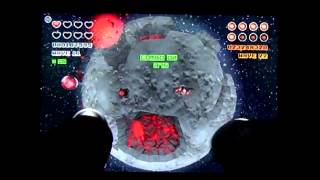 Space Trooper is an original 3D arcade whose main feature is that the battleground are spheres (namely, planets) in where you have to battle waves of bug-like aliens. Your character is controlled by two on-screen joysticks, one to move and the other one to aim, plus some gestures such as tapping the latter twice to throw a gamma-nuke. The myriad of enemies are spawned from nests acting also as troop transport spacecrafts, which will be your main objective. There's a sort-of storyline between levels in case you are interested in, it's quite hilarious by the way.

Space Trooper might not be as spectacular as other recent 3D-like arcade game, but it's very thrilling and as soon as you learn the ropes you'll enjoy it a lot. We'd like there to be more different enemies and some kind of interaction with the environment, but it's very fun and hasn't any remarkable flaws beyond that it can be improved in nearly all areas in this or that way, let alone sound, which is awesome; and the AI, which seems pretty simple but you'll realize in the end that it isn't.

This game was developed by Bento Studio, who also launched Surfing Weaver, which has not anything to do with this Space Trooper.

Kill an army of alien spiders coming from space and destroy the asteroid they’ve nested on! It’s up to you to use your special powers and awesome weaponry to battle these vicious spiders, and save planet Earth.

Description
Earth will soon be under attack by a vicious army of ants arriving on an asteroid from the farthest reaches of outer space. You’re the only one with special powers and awesome weapon that can stop these vicious spiders and destroy the asteroid. Bend the ground at will, and exterminate the alien spiders –
before they exterminate you!

The original arcade shoot em up (shmup) returns in 3D! Get ready for some insane blaster action with asteroids, meteors and aliens everywhere around you! The old school arcade classic shmup has been reinvented for the 21st century. Asteroid 2012 shakes down the old arcade classic and catapults it into deep space - delivering wave after wave of aste…

Guardian Earth HD New Survival Mode! Now Supports NYKO PlayPad! New Weapon upgrade system! Ultimate Beam weapon, and new Graphics!! You take control of an elite fighter squadron tasked to defend earth. A hostile alien armada is headed for earth, you are earth’s last defense. Can you save earth before its too late? Battle your way through 10 level…

Take command of the galaxy defense force as they fight off the alien horde in a last ditch effort to save Earth. Galaxy defense force is a tribute to the glorious age of arcade space shooters. With powerful weapons, customizable ships and an endless horde of enemies, the game boasts a fast paced action filled experience. Raving Reviews: “The most…

Premium - No ads and easier to get weapons ☆ Destroy thousands of zombie alien monsters and defend the earth from a galaxy invasion with our cute and adorable super hero. ☆ Use the super special weapons and superpowers to fight and combat the demons from outer space. Hours of fun and action shooting in this non-stop side-scrolling defense game. ☆…

Spinning Space is classic arcade space shooting game with colorful graphics and loads of power-ups. Survive as long as you can while destroying asteroids and blowing up alien ships.