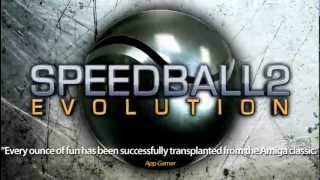 A violent sport game where anything goes.

Speedball 2 Evolution is, as you will surely expected, the ported version of those so-late-80s games, which in turn were vaguely inspired by 70s film Rollerball and everyday NHL. Broadly speaking, it takes place on a dystopian future when the most popular sport consists on two teams fighting almost without rules to put a metal ball in the rival goal. Points are gotten whether by scoring, beating a player till he's KO or putting the ball in some bonus element through the field, as slides or traps.

Even though controls can be chosen between tilt or on-screen pad, be warned that this game is purely chaotic. There isn't any minimap and above-field camera is so close to let you prevent rival movements, so matches can quickly become an exchange of fierce tackles and blind passes. That how the violent nature of the game is faithfully represented, though sometimes you'll miss somehow something to call "strategy". This also means that gameplay is intense and thrilling, and that most matches aren't decided till the very last seconds. As an example, I lost my first match by a crushing 2-42, but I got my own back in the next match winning by 35 to 28.

To be perfectly honest, even though original Speedball series won a handful of prizes and got nice review scores, with hindsight we should say it wasn't a so good game. However, it was a fiendishly fun game, able to make you spend hours and hours. This same applies to this Android port: the modifications it has undergone to be adapted to mobile devices (namely, tilt or on-screen controls and smaller field) have kept all the virtues and flaws of the original game.

Two interesting additional points are the impressive intro sequence and the management menus between matches, when you can train your players or hire new ones. Cyberpunk-like music is also deeply appreciated.

In conclusion, if you played to the original Amiga game, trust me, you will like to revive that. Matches take two minutes long, so are perfectly suited for modern life backs and forths. If you didn't, but are looking for something in the midst of sport and nonsense gaming, eureka, here's your game. Rated with a 3 almost a 4 out of 5, waiting for an upcoming update allowing multiplayer. We should have already started training...

"If you played to the original Amiga game, trust me, you will like to revive that. Matches take two minutes long, so are perfectly suited for modern life backs and forths." Android Zoom

“Yeah you want to buy it." Into Mobile

““A must-download, particularly for fans of the original. Newcomers to Speedball will find plenty to smile about too.” – Appys

Speedball 2 Evolution is now MOGA Enhanced! Available at major US retailers and online at http://www.powera.com/moga.

Speedball 2, The Bitmap Brothers’ smash hit, multi-million selling classic futuristic sports game now brings all of its adrenaline pumping thrills to Android for the first time. Set in the near future, Speedball 2 Evolution is a fast paced, brutal fusion of handball and ice hockey where only the fittest and most cunning survive.

Plan your strategy, hand pick your team from a roster of hundreds, then power your way down the field, using every trick in the book to take your opponents down and drive your way to glorious victory through a mix of blood, sweat, fists and elbows. Speedball 2 Evolution is packed with a huge variety of game modes and features to keep players coming back for more including in-match power-ups, single player tournaments and a full career mode. Outside of the matches, gamers can also develop a world beating team by upgrading their players, earning cash and then trading them on the transfer market.

Speedball 2 Evolution brings together its unbeatable heritage with high octane, in-depth gameplay to give Android gamers an experience like never before.

Guerrilla Bob is 3D shooter game that allows you to play single-player, CO-OP and online multipla. Guerrilla Bob will bring the arcade times that time to your Android, no need to insert coin! This version has been optimized for Xperia Play. You're a guerrilla called Bob whose aim is to survive lots of enemies that want to see him dead. The only way….

Homage to Space Invaders.. "- Die humans! I've come to destroy you!" There must be tens, hundreds, maybe thousands of versions of Space Invaders, but only a few selected games have the right mix of pixelated graphics, 80s spirit and nerve to be considered a true homage. Most of the games listed as classic shoot'em-ups have better technology than th…. 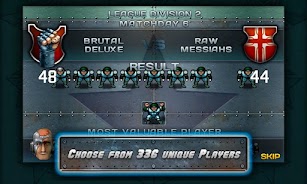 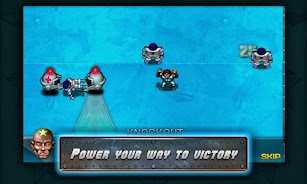 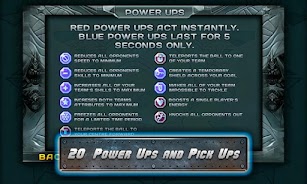 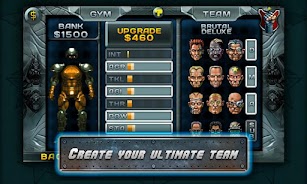