"Hey! Did you know who Rugal was, you noob?"

While we patiently wait for someone who can reinvent fighting games to adapt them to touchscreens without making use of an external controller or asking for smash the delicate screen, SNK is stubborn enough to launch their 2D games as they are, with few if any modifications from the original game.

Because that's what it is. The original roster of characters, the same combos, everything; plus more game modes and additional stuff here and there. It's quite odd to play KoF on mobile, no matter how effort has SNK done to make it the more responsive and anticipating they can, but it's great to play it. Perhaps the most gruesome combos are beyond your reach and you will stick to the basic jumping kick, fierce, fireball; but AI is quite benevolent and soaks superattacks (whatsoever they're called now) as long as you aren't too unabashed. There's an option to input "double half circles forward and C" or any other complex move without having to actually make the move on the on-screen joystick.

The lack of any trial or lite version is a pity, but SNK has already gotten us used to it. The tutorial mode is quite recommendable and, in the worst scenario, it might serve as a work-out for real matches on your home console.

NEW CHARACTERS, NEW TEAMS
In addition to the characters from he previous installment, the 4 new “ART OF FIGHTING”, “PSYCHO SOLDIER”, “KIM”, and “IKARI” teams , “NESTS-Style KYO” and “IORI with the Power of Flames”(14 new characters), join the cast of "KOF-Android”!! You can now create your favorite team from this formidable roster of 34 fighters!

A SINGLE-PLAYER MODE RICH IN CONTENT
6 game modes are available for thousands of hours of enjoyment even when playing alone: “SINGLE BATTLE” for 1-on-1 fights, “TEAM BATTLE” for classic KOF 3-on-3 gameplay, “ENDLESS” Mode to defeat as many opponents as possible with one character, "CHALLENGE" Mode to clear trials by fulfilling requirements, the newly introduced "TIME ATTACK" Mode to compete for the best clear times by winning 10 matches, and “TRAINING” Mode to get accustomed to the Virtual Pad-based controls and practice your combos.

SIMPLE COMMANDS
The Virtual Pad recreates perfectly reproduces KOF’s smooth controls. Even novice players in fighting games will be able to release various Special Moves, Super Special Moves, NEOMAX Super Special Moves, and other complex moves in one touch. With the Simple Commands, you can easily perform many of the game's fancy combos!!
*Please refer to "TUTORIAL" Mode for an explanation of these commands.

ADDITION OF TONS OF NEW TRADING CARDS, ILLUSTRATIONS, AND OTHER EXTRA CONTENT
Plenty of new Trading Cards (that can be acquired by using points earned during gameplay) along with new Illustrations (which can be viewed at any time by fulfilling certain conditions) have been added to this latest release! Moreover, "KOF-Android 2012" includes rough sketches and illustrations that can only be seen here, which fans cannot afford to miss!

A new warrior has entered the ring! Take control of 32 world warriors and test your mettle against players from around the world. Street Fighter IV: Champion Edition perfects the winning gameplay formula by offering the most exciting fighting game on mobile. Long time Street Fighter fans can jump into the action and have an instant familiarity wit…

A real time tactical game set in outer space. LoD Tactics is, as its name implies, a tactical game. A tactical game played in real time but played on a gridded board anyway, though you don't actually see the tiles. It's set in a WH40K-like scenario, where space mareens fight off bad guys by land or air in gloomy claustrophobic indoors and the empti….

The Killer with The Instinct

A fighting game featuring one-on-one combat. The game borrows the attack set of Street Fight and is also inspired by the finishing moves from MK There are also several features that distinguish it from other franchises: A double energy bar KOF : instead of winning two rounds, each player has two bars of energy. If a character finishes with hi…

Become the new challenger in the all-time classic THE KING OF FIGHTERS '97 on Android! Revisit this fighting gem, by playing one of its legendary (and sometimes hidden) teams, and behold the numerous endings the game has to offer! Put an end to the evil Orochi's resurrection scheme, and finally settle the score between Kyo Kusanagi and Ior… 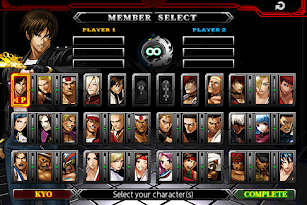 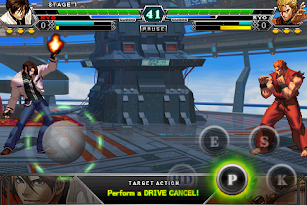 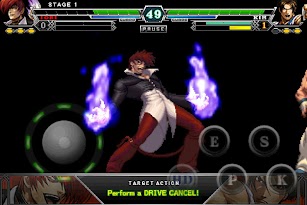 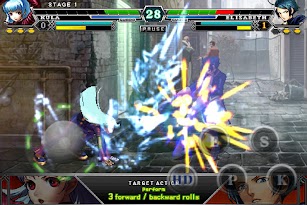 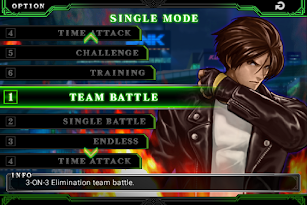