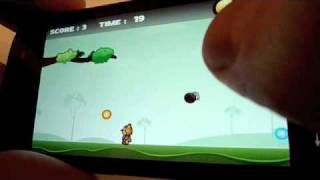 Throw thunders and avoid being killed

Thunder Bear is an Android game in which the main character will have to destroy the Meteorites thrown by Zeus.

The controls are either Sensor or Touch, so you can choose whichever is best for you. Touch the arrows or tilt the phone to move the Thunder Bear left or right and tap on screen to throw a thunder, avoiding the meteorites and trying to grab the powerups.

There are three game modes: classic, survivor and time attack. It includes four worlds and 12 levels inside them, which will be unlocking as the game progresses. The game is not as fun as it seems and the controls are not always smooth, they don't always throw thunders exactly when you tap on screen and it soon becomes repeating and kind of boring. It was created by Magma Mobile, developers of plenty of popular applications such as Reversi, Checkers, Astro Jump... This, however is not their best one, although it can be entertaining at first.

Thunder Bear is an addictive Android game in which Thunder Bear will have to use his new powers to fight off Magic Meteorites thrown at him by the angry Zeus. As you progress through the levels, the difficulty will increase and you will to use wisely your new given bonuses.

The game offers 3 modes: Classic, Survivor and Time Attack. All the scoreboards are powered by OpenFeint.

Little Bear is a bear who enjoys spending time in the forest with his animal friends. Little Bear is a very curious bear. One day, his curiosity takes him into a dark cave where he discovers Zeus’ hidden thunderbolt.

Zeus finds Thunder Bear in the forest and begins sending down Magic Meteorites. Thunder Bear decides to fight back by using his new power to defend himself.

In order for Thunder Bear to stop Zeus’ Magic Meteorites he must prove that he deserves this God-like power. Thunder Bear will therefore have to fight his way through the forest.

TRY & BUY: UNLOCK THE FULL ADVENTURE FROM WITHIN THE GAME! The mighty Zeus, ruler of Olympia needs your help! An uprising of rival gods are desperately trying to destroy Zeus and all who worship him. So as their terror rains down on the cities of the world, you must take charge of the ultimate power of Zeus and vanquish them forever! The wo…

An addictive running game for fans of the genre. Ever-running action games are more present than ever. Hamster Run is an ever-running adventure with a cute and endearing main character. In this game, you'll need to help Urban Hamster, who is now lost in Madagascar. And the forest is not safe at all, you will need to protect it from dangerous obstac….

Help dancing penguin find new friends by travelling around the world. The main character of Jelly Jump is a lovely but sad penguin who loves to dance. However, he found out that his friends made fun of him and decided to break up with them and travel the world in search for new friends that accept him as he is and approve of his dancing. The gamepl….

You’re a puny little penguin in the frozen arctic who’s been trapped in a cage by a hungry polar bear - what do you do? Gather your courage, kick the cage open… and run like heck! Penguin is a fast-paced running game that puts you in the flippers of the amazingly cute Captain Penguin. He’s making a mad dash to escape the polar bear and you can h… 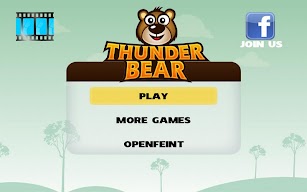 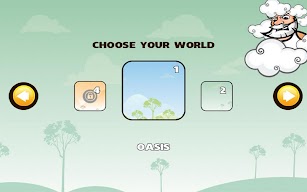 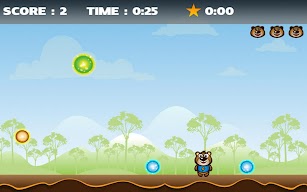 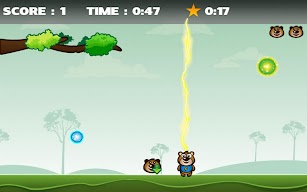 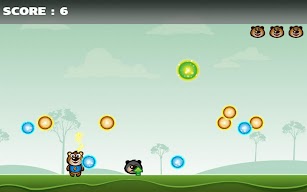