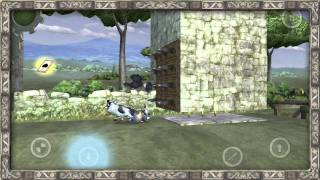 Over 5 million people have played Wind-up Knight on Android!
Only an elite few have managed to finish it.
Thanks for playing!

"WuK will definitely keep on going"

Looking at the screenshots, it may seem that Wind-up Knight is just an other scrolling game where you only have to tap to crouch or jump to avoid obstacles. A further analysis reveals that we're facing one of the most addictive, entertaining and amazing game of this year.

Gameplay is simple, with a learning curve that many games would like to have; and an easy yet highly appropriate control system that allows a devilish difficulty degree without having to understand any abstract concept beyond average comprehension. The first levels you can only jump to advance and collect keys to wind yourself up. If you haven't wound for a while, our little lovely clockwork knight will perish. Don't forget to pick gold coins to buy a sword to slice up cocks and other Avernus monsters; or to purchase better armor, helm or shield so your character don't die of a fool fall, mangled by a two ton stone on the head, hellishly impaled or awfully burnt down.

In every stage there's a hidden card. Once you have enough cards you'll unlock secret items or even levels. Graphics look like 3D but aren't as heavy-weighted, and look really good. Mind you, that there's a loading time before playing a level first time. Music prettily goes with the game, though it isn't its most innovative feature.

The best of this game is that it's absolutely free, no ads. In fact, if you were a real pro gamer you'd be able to play all 50 levels without spending a cent. Ordinary folk can play many levels, but will get stuck sooner or later. That's the true gimmick to attract players, and game's so fun that it's rather difficult to not get lured at some point of the game, helped by some hot one-time in-app promotions.

In short, excellent game. Worthy and recommendable if only for the fun intro and the hilarious tips between levels. If you add all aforementioned stuff, we could say it's not only one of the best games in its category, but also one of the best -if not the best- quality-price ratio game on market.

We might ask for some online leaderboard, or customizable character (may I play the Princess, can I, can I?), or shareable tips via Facebook. As you can see, minor details just regarding to extend game's life.

Wind-up Knight by Robot Invader is a high-end, action-packed, 3D side-scrolling adventure game, and it's here to show you how games are supposed to be played.

Guide your Wind-up Knight through devilish levels--over 50 in all--to rescue the Princess from the clutches of the evil Black Knight. Run, jump, roll, and slash your way to victory. Not your typical runner game, Wind-up Knight is the type of challenging game you've been missing in your life.

Here are some bullet points all up in your grill:

Wind-up Knight has been designed from the ground up by Robot Invader to provide a console-level experience for your Android device. The Princess hasn't got all day, download it now!

Note: if you are mega awesome it is possible to unlock all the levels in this game for free. If you prefer to pay a few bucks to unlock levels, that's cool too. However, some purchases are not transferrable across devices, will be lost forever if you uninstall or wipe your phone, and are non-refundable.
_______________________

Wind-up Knight is AppliGet's 2011 Android App of the Year!

"A success story from start to finish." - Tara Long, DESTRUCTOID

Match Up is a classic memory card game designed for kids. Cards are laid out in a grid face down, and players take turns flipping pairs of cards over. If the two cards match, the player get score, If they do not match, the cards are turned back over. Match Up will allow you to challenge your memory. It has very easy 2x3, 3x4 by tables which your ki…

Who doesn't love robots? Roboland is a challenging & free mobile robot game to test your tapping speed and see how quickly you can make mega robots and super robots on the factory belt. Features: 1. Simple graphics, easy to play and everybody gets hang of it in just a few seconds. 2. Speed increases in each level and hence will challenge y…

Rise of the Blobs

Feed the blobs and make them disappear. Rise of the Blobs is a puzzle game in which waves of blobs are invading the marshmallow's tower house. In order for Marsh Mal to survive, you need to help him feed the blobs with fruit and make them disappear by exploding the adjacent blocks. The game includes power-ups, which are purchased with coins and hel….

Nostalgia, retro and super cool! First there was the original Galaxy Invader (Galaxy Invader 1978). Now this sequel blasts you back to the 1980s to the childhood memories again when games were simple but very addictive. An accurate recreation of the VFD LSI game by CGL, Gakken, Tandy and other companies of that time. Fun for all ages with three dif…

Run, dodge, jump, and slide into an incredible chasing adventure.  Lea Catomy is a brave little princess of the peaceful cat realm. Every now and then the peace is broken by a bully bulldog that invades the little cities of the realm to show his power, but Lea will remind him of his place and try to bring him out of the realm. The dog will be tryin…

Wind-up Willie can't stop running and chasing the stars frozen in the ice. Help Willie to break the ice cubes and unlock the stars. You can do this by shooting the ice cubes with the collected snowballs or by pushing them from high places. Feel free to restart all the levels with the Restart feature without any consequences or time penalty. Hav…

Sequel to the acclaimed 2D sidescrolling ever-runner Wind-up Knight. That's how it works: Robot Invader's Wind-up Knight was one of our favorite games at the moment. It was one of the heirs to the feathered throne and we ran out of praises and acclaimed its awesome graphic design, its accurate gameplay and overall, its greatness as a neat example o….