Zombie Age is a survival game featuring a zombie apocalypse

"You all zombies, get out of my property"

Zombies are taken cities one by one. The end of mankind is going to happen unless someone stop it. You embody a green beret, a veteran, who is the only survivor in a small city, thanks to its warlike experience and, above all, due to he's armed to the teeth. Zombies will approach you by waves. Your goal is to finish them all before reaching your backyard's fence. If they destroy the fence, you will be exposed to their bites, so you better keep them away.

Since new and stronger types of zombies will be showing up as you level up, you'll have to make the most of the money you collect in each level to upgrade your weaponry and equipment. Think of it as a life investment. Thus, each level is a survival "day", you will be able to unlock weapons items and even crew members as you keep surviving day after day. In addition, you will unlock achievements that entirely depends on your performance.

The game is tap-controlled. Thus, you tap to shoot at zombies, and to select special weapons such as grenades. Likewise, you can switch guns by taping the "bullets" button. Basic gun won't never run out of bullets, the others guns you can buy will.

The game is set in well-crafted cartoonish graphics, side-view, good soundtrack and sound effects. Although the gameplay can be repetitive and boring after a while, the upgrading system enhances playability and challengingness. A good title by divmob.

The world is under attack of savage zombies and the end of mankind is going to happen sooner when those green creatures are walking everywhere. You are the only survival citizen in the town who can deal with the undead. Defend your house and don’t let them pass through your gate. To stay alive, you have to utilize wisely your limited resource and collect money as much as you can to buy powerful weapons or hire the best zombie assassins in the world when you can no longer stand.

Why are survival games so addicting? Do you seek something unique? Need a good challenge and an epic adventure? Let's play Pixel Survival Games! Pixel Survival World is a sandbox survival game where you and your survivor friends will monster kill and defend against monsters for loot. Protect your settlements, protect the survivors and acquire…

Zombie Age is a survival game featuring a zombie apocalypse. Zombies are taken cities one by one. The end of mankind is going to happen unless someone stop it. You embody a green beret, a veteran, who is the only survivor in a small city, thanks to its warlike experience and, above all, due to he's armed to the teeth. Zombies will approach you by w….

A combat-puzzle zombie game. In a storyline too much like Resident Evil 5, strange events are happening in a lost African village and people's starting to eat each other. Of course, the only way to fix that is filling the poor infected full of hot lead. However, this isn't a shooter game, but a columns-like puzzle game in which you have to match th….

A zed defense game. Zombie Blitz takes back the old habit of blasting zombies from afar, which is not only safer but more enjoyable. In this case, you manage different air squadrons in order to protect civilian shelters from zombie herds. This game is played through a top-down perspective, in which you tap wherever you want to bomb and wait the com….

Jump, fire, kill zombies. Zombie Dash is an action game for Android that features a town flooded by zombies. You need to do everything you can to survive, walking and jumping, killing zombies in the way and trying not to wounded. In a dangerous scenery, you need to tap on the jumping button (bottom left) or the shooting (bottom right) to advance an…. 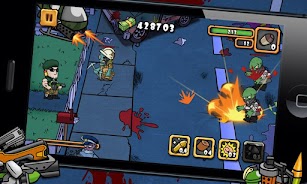 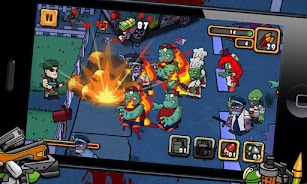 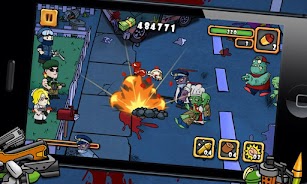 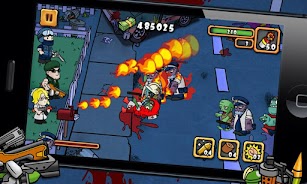 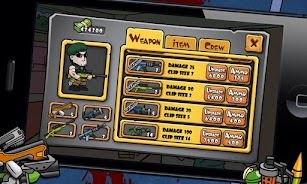