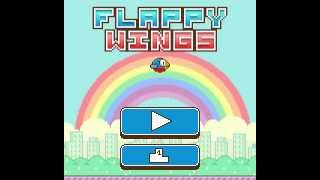 Just like the original bird-smashing-into-the-pipe craze, plus a bit of poo

Green Chili Games' Flappy Wings is exactly like the sudden craze Flappy Bird, apart from two features: the bird actually looks like a bird, and every couple pipes it lets out a poo.

Tap the screen continually to keep flapping higher. Dodge the pipes as you barrel forward through the skies, a stupid-hard feat. Plonk! You appear to have died once more. Hey guys, I got four!! Four!!!!

It's simple, it's dumb, it's apparently just as addicting for the general population as the original. Plus there's pixellated excrement, which is clearly an added value.

If you were hoping for Flappy Bird and came here instead, you might as well download Green Chili Games' Flappy Wings - it'll be exactly the same experience.

Fly into freedom!
The game everybody is talking about

User Reviews:
nuclear-n01: 'Way better than flappy bird got my high score on this in half the time I did on flappy bird.'
David O.: 'Its like a parody video but of a game! Get it NOW'
June S.: 'Better than Flappy Bird'
Jocelyn J: 'This game is really fun like flappy birds but the bird poops, makes noises and its eyes are X's when you touch a pipe, get it !!'

Tap to help Miku fly and avoid pipe.(Hatsune Miku from Vocaloid) It's many flappy Games here.It's time of Flappy Miku . Help her avoid and fly like a bird by tab on screen. Easy to play(May be).

Feeling annoyed because of a Bird Game? Do not smash your phone, but try this Flip Flap Bird game instead! THIS IS THE MOST ADDICTING BIRD GAME ON THE PLANET! Once you start, you CAN'T STOP!!! YOU WILL JUST BE ADDICTED! Start now and downlaod the #1 bird game! Better than the original " Flappy " How to play? Cute little Flappy Bird ne…

much flappy big pig such flight, great game! Take to the skies in the flappiest, zaniest, craziest adventure game ever....Flappy Pig. Somehow he got some wings,(so if you ever told anyone "when pigs fly", like that one time in high school Karen, it's time to pay up!) and now he can live his dream. Simple easy one touch con…

Flap your wings to fly! Flap the little wings of the cute alien in this thrilling and action packed flying adventure. Flappy Alien is a fun side-scrolling game featuring stunning 2D graphics. Game Features: Simple one touch controls: touch to flap the wings. Easy and fun to play, but a challenge to fully master.

Fly your duck through a snowy adventure and grab a high score! Tap anywhere on the screen to flap those little wings and guide your ducky through a snow filled adventure. Watch out for those metal pipes because if you hit one then your bird crashes and it's game over. Duck Run is a very simple game with controls like the original Flappy Bir…

Fly Bird Fly, Flap the tiny wings of the fun Birds in this #1 thrilling and action packed flying adventure game! These Birds need your help to Fly, avoid the obstacles, collect star points and hearts their little wings, these flappy bird are not afraid of any danger. they welcome it, it makes them angry. It's your job to guide these cute bird…