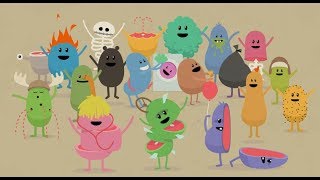 Download APK from previous versions of Dumb Ways to Die

The official game of DWtD

"So many dumb ways to die"

In case you haven't seen the video that started it all, fetch it there. It all was an ad for Melbourne Metro company, who in its intent to avoid people falling to the railways it got everybody stopped poking grizzly bears. Things usually end upside-down there down in Aussieland (respect).

This official game is indeed a compilation of fun minigames, not a single worthy of an app for its own, but altogether those little irksome suicides make something interesting. In the end, it's a compilation of casual games cloaked beneath the "dumb ways to die" brand. It won't help people to avoid falling anywhere or be safe around trains (the song didn't, either), but it's for free and you don't know when you want to play such casual thing or distract your little nephew, for example.

Recommended, if only to hum the song once again.

You've seen the video—now the lives of those adorably dumb characters are in your hands.

Enjoy 15 hilarious mini-games as you attempt to collect all the charmingly dumb characters for your train station, achieve high scores and unlock the famous music video that started it all.

From piranhas and platforms to snakes and level crossings—tap, swipe, and flick to safely escape a wide range of DUMB WAYS TO DIE™.

Download the FREE game now and remember, be safe around trains. A message from Metro.

GAMEPLAY
- Why is his hair on fire? Who cares, just RUN!
- Quickly wipe your screen free of puke
- Balance that wobbling glue eater
- Flick the piranhas out of range of those precious private parts
- Swat wasps before it's too late
- Best not invite that psycho killer inside
- Carefully remove forks from toasters
- Help self-taught pilots
- Get back from the edge of the platform you fools
- Have patience at level crossings
- No crossing the tracks! Not even for balloons!
- Find true love during hunting season
- Duck the bear for a candy shower
- Go on, press the red button
- And who knew rattlesnakes were so picky about mustard?

Be safe around trains and watch the original Webby and Cannes award-winning video at dumbwaystodie.com

Your sheep are lost and must find they way back to their pen.These sheep will quite stupidly walk in front of cars and other hazards. Guide your stupid sheep safely back to their pen, crossing fields, roads and frozen lakes. Avoid cars, tractors and electric fences on your way through 32 distinct levels, split into two colourful worlds. There are…

Craft, battle and build underwater as a sea creature online with players around the world! Beautiful 3D map environments, Marine, Atlantis, Castle, FishBowl, Tribute, City, Lighthouse and Graveyard Team up to complete quests and battle enemy Piranha and Sharks for shiny experience coins. Be unique, customise and dress up your characters skin, trail…

DUMB JUMPER These funny characters are dumb in many ways, but they don't want to die! Don't let them SPLAT to their deaths, tilt your phone to keep them on the platform! SUPER FUN & SUPER DUMB Unlock 4 unique characters with unique and silly abilities and lives! ONLINE LEADER BOARDS Compete with your friends on…

These Foolz are dumb in many ways, but they don't want to die! Work your way up the rankings from 'Officer' to the 'Chief of Police' in the all new and exciting Foolz series of games. You must complete each level in just a few seconds as you tried to catch criminals, beat the target range, drive police cars, search with helic…

Epic Arena is a free-to-play turn-based 3D strategy board game that plays like a combat action video game. Deploy your units, power them up, and defeat your opponent in epic two-player matches. Join the arena now! Epic Arena’s 3D graphics and bone crunching sound effects will excite your senses. The tactical gameplay will challenge your mind and t…

Play new run game with amazing characters to upgrade. The big fish piranha is back to haunt you! Escape from the piranha to survive. Collect coins to earn money and upgrade your character. Enjoy the amazing arcade game with lots of fun and exciting game play. Download to play your new arcade game - "Piranha Returns" on Android Google P…