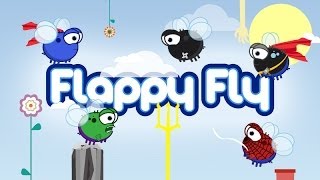 An all-too-familiar flaptastic game, this time dressed up like a fly

Somewhere, someone is downloading and cataloguing every single Flappy-clone into an archive. The APKs will be encoded into binary braille on an enormous ingot of solid gold and shot at lightspeed into deep space, standing eternally as a testament to man's contribution to the universe. A vigintillion years later, the hyperintelligent beings so advanced their existence crosses through twelve dimensions at once will come across this ingot and decode it. When this finally takes place, Ynfo.Apps' Flappy Fly! will be there.

Tap to prevent the fly from falling. Lovingly guide him safely between the obstacles, which are sometimes pipes and sometimes pipe-like objects. The physics are the same ones you know and cherish. The environment changes at random, sometimes displaying a peaceful forest glen and other times what appears to be the fiery pits of hell.

If you've played one FlappyApp, have you played them all? There's only one way to find out.

Ynfo.Apps' Flappy Fly! is a look into the gaping maw of futility. Or, y'know, a dinky casual game about a bug. Your call.

Flap your wings to fly...

More Flappy stuff, who says it had to be about birds?. Zacatictac's Flappy Turd is one of the most hilarious replicas of the successful Flappy Bird. A flying turd? Why not? If you aren't into fowls, here you have a more scatalogical option. Setting apart the character, the rest is almost the same. Gameplay: tap to make the turd fly (as insane as th….

Cybies Flapping Bird! Flap your wings and fly... [How to play] Tap screen to flap your wings to fly. Avoid environment. Explanation for permissions: Device ID is used to save your score.