Protect the Arctic by defeating the Pandas

Crazy Penguin Assault is an entertaining physics game where your objective is to defend the Arctic by attacking the invading Polar Bears. Launch penguins at them in order to defeat them and try to do so in the fewest possible shots, taking into account that there's a maximum number of penguins you can use.

Firstly, you'll be able to choose between Campaign mode and Frenzy mode and then begin to complete every level until you have no more. As you can see, the free version only presents six levels of each mode but the full version allows you to play over 90.

Graphics and interface are pretty curious, as they are inspired by retro games and can be quite enjoyable to try out. Controls are also different from these type of games, you just need to tap to launch the penguin and tap again to make him move faster.

Digital Chocolate, Inc. is the developer of Crazy Penguin Assault, a sequel to the Catapult game, in a free and full version. Addictive game for all players.

Fend off invading Polar Bears by hurling courageous penguins at them with your trusty catapult! Strategy and Campaign modes! Over 30 levels of hilarious action including boss battles, bonus levels and special penguin power-ups! By DChoc

One touch, easy to pick up, fast paced - mega penguin adventure. A little baby penguin named "Kelvin", who does not know how to swim yet, was left behind and now needs to run and return to his penguin family and safety. During the baby penguin's run in Antarctica, the baby penguin has to do his bit to fight pollutants left by huma…

** EVERYTHING UNLOCKED!! WOW! ** ** ACTION PACKED SLASH & RUN GAME! ** Welcome to Angry Penguin Jump, skiing penguin Apprentice! A Penguin Jumping is on the dive from the Frozen mountain City rooftops to the goal line. Play this FREE version of the mega-hit game Angry Penguin Jump, and fine out for yourself what millions of players around th…

Defend the Castle is medieval castle defense game. The game has lots of levels and types of shells for catapult. Choose shell from top left corner of screen. Touch and move trigger of catapult and see changes of power. Then fight and attack enemies. New shells will be available in highest levels of the game. To get more scores try to change the sh…

Catapult is a war game that takes you back in time making you relive the epic battles with catapults in a hostile scenario. The objective of the game is to destroy your opponent by throwing with the catapult, primitive bombs. Initially, you create a mountain so random that describes the hostile environment. At the sides of the same are positioned t…

Arcade shooter where you control a catapult, break the wall of enemies, earn points in a fun game. Different levels, achievement points, a few types of enemies and princess.

XnO - 3D Adventure game is a 3D physics-based puzzle. You like launching animals at things, don't you? That's been proven to be very funny on mobile devices. XnO has an angrybirdish gameplay, however, both the story and the visuals are completely different. X is a penguin which wife named O has been kidnapped and brought to a merchant ship with oth….

Pull back, target and throw - fling the cheese and release the terror! Are you ready to play the Cheese Catapult? Cheese Catapult is a new, addictive game that involves mischievous cats and fresh yellow cheese! That’s right: in Cheese Catapult, you must defeat the cats that are up to no good with their only weakness: cheese! Master the catapult a… 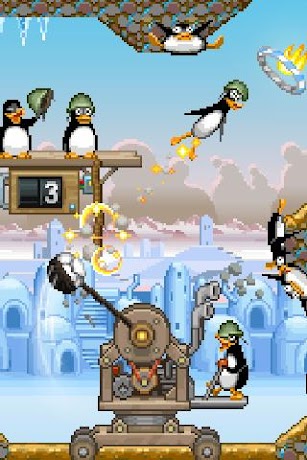 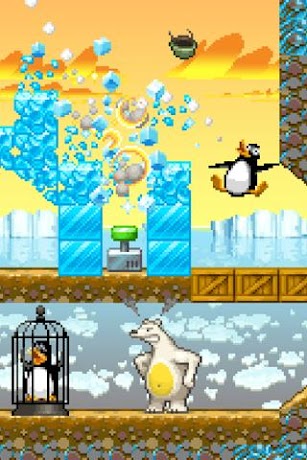