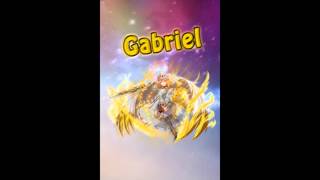 Having trouble with the latest update? Contact us at help.heroes.android@igg.com with any questions, comments and suggestions. Include your IGGID and we'll send you a gift to show our appreciation!

What's NEW in this version!

Heroes & Monsters is a match-three game with the addition of a handful of fantasy RPG elements, namely monsters, to create a new game that mixes bubble blasting, card collecting and leveling. Every time you make a combo with three of more of a kind gems, a monster of your team will attack an enemy. Depending on the color of the selected gems it'll concern an element or an other.

Between stages, you can draw new cards to configure your team, or turn down old ones to boost and make evolve the most powerful. Eventually you'll realize that the real monsters need a prize much higher than common ones, this game is no different from any collectible card game in this regard.

Graphics are simple. Gems shine, but monsters and artwork aren't as beautifully drawn as other similar games, and game can give a boring linear feeling too soon. It's a nice move and a chance to try something new, but don't keep your expectations too high.

In a world of Humans, Monsters, Gods and Demons, only the fastest and strongest will prevail. Embark upon a fun and adrenaline filled journey with your own pet Dragon. Take control of the elements and fight to the top! Conquer the flaming wilds, vast oceans, deep forests and sacred temples. Gather monsters, heroes and mythical beings! The world rests in your hands – and yours alone.

Game Features:
Exciting new match 3 RPG with the cutest Heroes and Monsters around
Fun filled battles and tons of levels
Easy and fun to play, but a challenge to master
Mix and match Gems for thrilling combos
Hundreds of monsters to collect and upgrade
Challenge other players and put your skills to the test
Daily events and special battles
Free items and giveaways every day

And What Are Our Players Saying?

"Nice game & easy to play!"
"Fun and easy to understand. Great game for beginners."
"One of the best games on Android!"

So what are you waiting for? The world of Heroes & Monsters is waiting for you!

Visit our fan page at https://www.facebook.com/heroes.monsters for the latest news.

Solid Poké-knockoff: Collect, train, and battle mini-monsters. Uken Games' Mighty Monsters might not win any points for originality, but that's entirely beside the point for Pokéfans bemoaning Nintendo's lack of presence in the m-gaming world. If you know and love (and grew up with!) the monster-collecting model, then you're in for a treat, even if….

Explore, build and conquer in Dungeon & Heroes! This brand-new mobile role-playing game is a 3D exploration game with exquisite maps and massive hero summoners. Ally with players around the world for endless exploration, guild battles and arena glory in your own epic story. Begin your adventure now, epic heroes are waiting for you! Who will b…

Fight monsters in 3D. In the absence of true fighting games, mostly due to how on-screen controls and human mind work, we've seeing the advent of a new fighting subgenre halfway between dancing games and gesture-based combinations. Said otherwise, you have to timely tap or swipe to attack and dodge, but you are not limited to a certain gesture and….