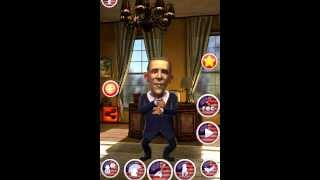 Talking Obama is an app that can be equally enjoyed for Democrats and Republicans. Fans will enjoy watching Barack's caricature performing funny stuff. Haters will love teasing the President.

Talking Obama is similar to other "Talking"-like entertainment apps. It features a 3D character (Barack Obama) you can interact with using preset action buttons. Thus, there's a swipable dock with all the action buttons at the bottom. Use them to make Obama "Harlem Shake" with some friends, take a selfie, sleep, get kicked, perform "This is Sparta", dance "Gangnam Style"... and a few more actions. You can even slap his face and bother him.

In addition, you can talk to Obama and he will repeat your speech with a funny voice. Record him performing all that stuff, play it as many times as you want and share it with friends.

Talking Obama is set in cute and neat 3D graphics and runs smoothly even on medium-end devices. Touchscreen should be more responsive and more actions should be added to enhance the game's playability. Likewise, we'd like to see more appearance customization.

Regardless, a recommended entertaining app.

The legendary arrival of the USA president Barack Obama on your phones. Other politics is not your choiсe: clever politician, who won election to the senate and introduced a health-care reform Obamacare, a great dancer, a gag for the terrorists and organized crime, and a gallant gentleman will entertain you during the whole game. Do you care about Edward Snowden and NSA spying? You want to start a debate about democracy, government, obamacare or Mitt Romney? Then whitehouse citizen - Talking Obama it's your choice!
Let Obama become a toy in your hands - drag him by the arms and legs, give him a slap, talk to him and hi will repeat, or just have fun!

This is not associated with President Barack Obama, the White House or any official Obama app, Mitt Romney, The Democrat Party, The Republican Party or The TEA Party. Nor is it meant to be represented as such. This is a Parody and is all original fan generated art.