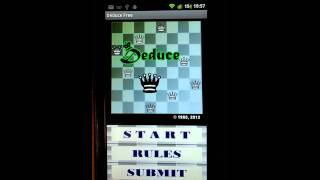 Deduce is a fast paced game played between two players on the same device, whose goal is to defeat your rival by placing your queens in a way the other player can't play his. in turns, every player places a queen wherever it can't be attacked by any other queen previously placed, till one of the player loses.

Graphics are flat and poor, as if it was an old CGA chess game, without animations of any kind nor whatever able to spice it up a little. It's like an ultra-fast version of chess, though you don't have to know chess or checkers at all in order to play it. It can be worth of giving it a go as a curiosity, but nothing else.

As a final word, there's a $200 version of this game. We can only understand that as a discouraging price to keep secret what it might be: a secret app for Illuminati and Reptilians of the Hollow Earth to send conspiracy messages to rule the world. Otherwise, it's little more than a bad taste prank.

FREE EDITION No Adds and it's free. No high scores, no computer player, no stats. Play it with a friend.

DEDUCE "Faster than Tic-Tac-Toe, but as complicated as chess." The simplicity of the rules can entertain children from ages 4 to 104. Taking only seconds to play, the unending complexity of Deduce makes the game the perfect mobile phone companion. Multiple player strength levels make Deduce a lifetime game for small children through serious adults. Compare your high scores to people around the world.

Deduce has a maximum of 8 moves, one move less than the children's game of Tic-Tac-Toe. Two players compete by placing QUEENS on squares not in the same row, column, or diagonal of another QUEEN (ie., not being controlled by another QUEEN of either side.) Last player to fill the board, taking the last available square, wins the game.

To win a Deduce Match, a player must win six games by a margin of two. Starting moves alternate between the players. (Tennis is scored the same way.)

Tic-tac-toe (or Noughts and Crosses, Xs and Os) is a classic paper-and-pencil game for two players, X and O, who take turns marking the spaces in a 3×3 grid. The player who succeeds in placing three respective marks in a horizontal, vertical, or diagonal row wins the game. An early variant of Tic-tac-toe was played in the Roman Empire, around the…

Noughts or Crosses is classic free professional game also known as Tic Tac Toe This App Features 1 players game 2 players game Attractive Design This is my first app to go on the play store hope you have like playing it!!! Please don't leave bad reviews without emailing me the problem first, thanks. This addictive challenging app that…

Put away your pencil and paper and enjoy a game of Tic Tac Toe 3D! It is free! It is fun! It even supports several game boards in both classical 2D and challenging 3D, all with optional beautiful themes in HD graphics. *** Challenge your friends in Tic Tac Toe 3D multiplayer or try to beat the smart artificial intelligence in single player mode.…

Just NOW absolutely FREE and NO ADS - install now !!! Tic Tac Toe - the best, calsic funny game Tic Tac Toe. Don't waste paper and play on your smartphone or tablet on this ecologic game - download now for free version on Android ! - This game is simple and professional. You can choose one of three game modes : - One player - your opponent is…

Free Tic Tac Toe game with animated icons: You probably already know how to play Tic-Tac-Toe. It is Simple, quick and funny game. Tic Tac Toe is a great way to pass the time. ● The game is played on a grid that's 3 squares by 3 squares. ● This game You (as Old man), can play against Ghost. Players take turns putting their marks in fishes. ● T…

Dots and Crosses Puzzles i.e.Tic Tac Toe is a paper-and-pencil game for two players, X and O, who take turns marking the spaces in a 3×3 grid. The player who succeeds in placing three respective marks in a horizontal, vertical, or diagonal row wins the game. Players soon discover that best play from both parties leads to a draw (often referred to…