Legendary Fighters is a fighter simulator game, much like other flying simulator but with the little addition of machine guns, homing missiles and military goals. As any other simulator, it's set in 3D graphics and we have different cameras to enjoy the show and different missions to fulfill. However, a tutorial would have been appreciated to start with, though it works as any other: tilt to nose-up or down or steer sidewards, tap on on-screen buttons to activate weaponry and slide the lever to accelerate. You can actually crash into the ground if you want so, you don't need to check that out, but physics feel odd at the beginning and there isn't much feeling of speed whatsoever.

Anyway, this game can be played for free as long as you don't want to buy one of the premium planes and don't mind to fly with the initial one all the time. Likewise, graphics may be 3D, but are far from what other games offer, and the overall experience is that this game is a good one, but needs improvement in nearly all areas. Fortunately, if you are looking for a war flight simulator there isn't much to find so far, so this game can be a very welcome enterntainment.

Become a Fighter ACE! Legendary Fighters is an amazing game with 3D graphics, that mixes arcade style with characteristics of combat flight simulation. Inspired in 60's jet era, the game brings the experience of dogfight in immersive environment and cockpit view.

FEATURES: - Unlock 5 epic heroes and upgrade their stats! - Choose the plane for your liking and become the flying ace! - Take part in the battles that changed the world! - Go back into the past and explore 4 historical sites! - Enjoy multiple extreme boss battles! - Defeat enemies and become the War Hero! - Discover 40 challenging levels of aerial…

Get into the air and fly real combat missions over the hot desert sands! The war is on and your mission is to take down any and all enemy aircraft in the hotzone! Dogfight up close with the enemy, fire missiles, guns and drop napalm bombs to gain the advantage! Experience the real time up close action that is Air Strike! Do you wanna be an ace fi…

Internal Gyroscope/Accelerator Required!! (your devices screen Tilts/Rotates) Exciting Free 3D Aerial Combat Action. Strap in the cockpit. Power up the engines and take off for full blown action. Battle enemy aircraft and strafe anti-aircraft vehicles. Climb the ranks from a Basic Airmen to the Chief Master Sergeant of the Air Force. Mark your ac…

THE MOST ADVANCED FIGHTER PLANE COMBAT AND FLIGHT SIMULATOR Plan your tactical missions and start now the World Supremacy challenge. Destroy ground, sea and air targets. Fight against waves of enemy planes in Dog Fight. Thousands of new missions every day: an adventure without limits! Realistic world maps and navigation, over 500 real airports,… 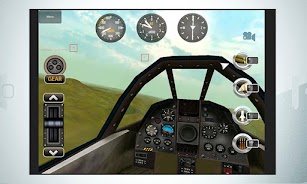 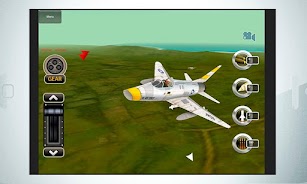 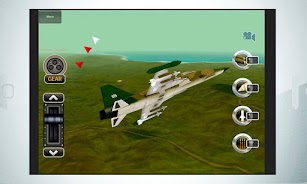