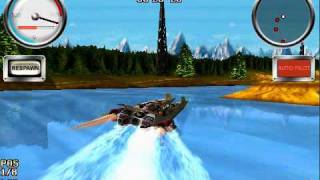 "Cleave the waves, if you find any"

Wave Racer is not Polarbits's best game, but it has acceptable graphics and is fairly fun.

The game consists of an outboard drive using the accelerometer to steer and reach to the goal. On our way we will find those typical gifts to increase the speed and similar stuff. Everything's rather old fashioned arcade style, think for example, as a river themed Out Run or so. There are some jumps to make it a little more exciting, and that's all.

Wave Racer is not Polarbits's best game, but it has acceptable graphics and is fairly fun. You should try it out if your device doesn't support their newer -and more spectacular- games.

This Lite version is just the demo of its complete version. Only has one level in arcade mode, one boat and one race to choose.

It takes a certain kind of person to strap themselves down in what basically amounts to an over-sized arrowhead with a four-thousand horsepower helicopter turbine engine lodged in the back-end. Right about now you need to ask yourself "Am I that kind of person?"

Wave Blazer features three single player game modes and a fully stocked online multiplayer versus-mode allowing you to face off against players from all over the world. No matter how fun outrunning the AI might be, nothing beats letting human opposition suck your wake as you leave them behind in a cloud of vapour and humiliation

This FREE version provides the FULL version of Wave Blazer, playable in single- and multiplayer. Full version with no ads is also available from Android Market.

GamePoint created a perfect dice game for couples and friends. Hit the button and let’s play RoyalDice together! Do you want to experience exciting new twists or win a record jackpot? Download RoyalDice for free and play this original yatzee with your buddies anywhere and anytime. Throw 5 sided dice, make good combinations and outscore your oppone…

Let the pieces fall down and create your own puzzle. Quantro is a retro-inspired puzzle game: a tetromino and tetracube game... or if you want it easier: a tetris twist. The app includes four modes for playing alone: Quantro Endurance, Quantro Progression, Retro Endurance and Retro Progression. Each game mode is different and has its perks and its….

Have fun with this great classic Dominoes! Dominoes (or dominos) is a board game played with rectangular "domino" tiles. Dominoes: Play Free Domino is an app for Dominoes fans! With it, you can have endless fun whenever and wherever you want. create private matches and play with your friends, try to defeat your opponents with strategy, r…

The finest free darts game for Android returns with this brand new version for 2014. Beautifully rendered graphics, advanced artificial intelligence and a choice of game modes combine to give you the ultimate darts experience on Android. Featuring 301, 501 and Cricket darts game modes plus real-time online multiplayer, Smart Darts Pro has everythi…