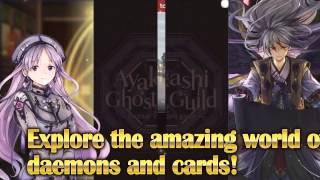 A CCG about ghosts

Since some time ago, Zynga is luring promising developers to promote and commercialize their masterpieces, not only to attract new players but also to not depend only on its few yet very successful first games. Hence this Ayakashi, a collectible card game themed about Eastern esotericism in which you play the role of an agent of a paranormal police hunting down demons and ghosts. Once you defeat an enemy you can try to bind it to your will and add it your deck. Your servants can evolve or fuse with others to get XPs and become stronger.

Regarding solo playing, there's what we could call a campaign ("this story is not based on actual historical events"), but eventually you will prefer to go online and meet other players. This game is free unless you want to spend money on premium booster packs, needed in case you don't want to eternally battle with your low-rarity demons. In addition, this game isn't as complex as other CCGs, so it can be a good way to get into this genre. However, gameplay isn't as smooth as it should be because it's always loading every screen and stage and it needs constant connection to the Internet in order to be played.

Anyway, it can be appealing to any lover of Eastern, manga-like ghostbusting or anyone looking for an original but not too difficult card game.

Collect demons to be the most powerful ghost agent! Ayakashi: Ghost Guild is the definitive version of gorgeous card battle RPGs with over 20 million players from around the world! No registration required!

【Create the most powerful demon deck as a ghost agent】

Ayakashi: Ghost Guild is a free role-playing / card battle game with a rich story line of the battles with ghosts and other agents.

◆ What is Ayakashi: Ghost Guild?

As a ghost agent, players try to come to grips with the mysterious events occurring around them. These events are being triggered by legendary creatures with enigmatic power beyond comprehension. Players must attempt to gain control of ghosts and bring them under their power, changing them to a demon. Throughout the rich story line, players must battle against scores of ghosts as well as rival agents.

【Loads of beautifully designed demon cards for you to collect!】

The game boasts gorgeous demons from all over the world, emanating from three distinct origins – Phantom, Divina, and Anima. Drawing the player deep into the game, they must fight through spectacular battles to collect them all and complete the Demon Scroll.

Since ancient times...sprites, magical creatures, ghouls, heavenly spirits and other beings with unworldly powers have been striking fear, and occasionally wonder into human hearts everywhere. These beings are better known as...
Ghosts.

Unbeknownst to us, a special group has been protecting humanity from these ghosts' spooky deeds. These people are known as... Ghost Agents.

A young agent with the power to communicate with ghosts, and sufficient talent to put them to use as demons, has appeared...

【Collect demons by summoning and progressing through the story】

【Negotiate with ghosts to add them to your demon collection】

As a ghost agent, the player has the chance to recruit ghosts to serve them as a demon after they have been defeated. The negotiation is not guaranteed to go well, and there is a chance the ghost will reject the offer so the player may have to rely on luck.

Once the player has obtained a demon, they can be enhanced by fusing them with other demons. Leveling up your demons will improve their abilities and increase particular skill levels, which is crucial in battling other players.

Legend of the Cryptids (Dragon/Card Game)

Dragon Armageddon is a surprisingly cool social game, which is available on iOS and Android platform. A legendary card-based adventure! Collect unique Cards and lead your guild to glory! Join the Holy War between Goddesses and Monsters to become The One. ★★Gain Dragons, Goddesses, Monsters and War Gods to form your guild. ★★★ ★★★The first legend…

Deity Wars is an epic fantasy card game. Deity Wars' scenery is quite similar to other RPG games: swords, spells and magic creatures. However, there are not real fights in here but deck fights. This is a story about three worlds that get united by a dimensional ascension. That unification brought together both evils and goodness creatures with spec….

An Arthurian Collectible Card Game. Although it would be unfair, I might well sum this game up to a yet another CCG whose only newness is to be set in Camelot instead of any other random medieval fantasy setting. And unfortunately I wouldn't be wrong at all. Heroes of Camelot features everything other games have already had. Its major advantage is….