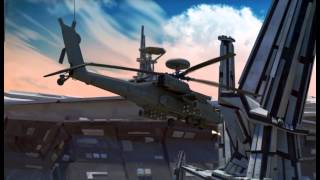 "Blue Thunder here, there's a mess down there"

OK, hold tight to your couch, because CHAOS isn't a casual game. We repeat, this is not a simulacrum, CHAOS Tournament isn't a casual game. Now that we have hopefully caught your attention, know that once you install this game you'll have to choose between one of the two real helicopter models available to start with. Models will be delighfully shown 3D in your hangar. As CHAOS is a simulator, even when it's a mobile game, please, fulfill the tutorial, because it can be quite discouraging otherwise. Indeed, you can crash on it, so you'll realize that tutorial is quite hard (yes, a lovely MD-500 crashed in the making of this review)

Game comes with everything you should expect: different cameras, simultaneous use of tilt and on-screen controls, and different weapons and counter-measures (namely, heat flares). It's safe to say that this game is worthy to be downloaded just for its tutorial, but once you get into real action it gets better and better. By real action we mean online real players. Meanwhile, there's a huge offline mode to get training, fulfill missions and get cash to buy upgrades and new choppers for your collection.

Graphics and sounds may not be top notch, though they look great. We understand that this is so to guarantee an optimal performance even on medium-end devices. If you are looking for the closest game to a simulator, here's CHAOS. It may need quite a while to get used to controls and it may not be a game to be played on your daily bus trips at all: that's its main flaw, but also its greatest strength.

This is the HD version. If your device can't bear it, check the standard version instead.

CHAOS Tournament HD - official tournament on CHAOS from the game developers
** for Latest and powerful ANDROID devices only **
This is #1 Helicopter multiplayer simulator.

Buying an HD version you will get:
- High resolution graphics
- Improved sound effects
- Antialiasing settings
- And also + 200 GOLD free bonus (it is equivalent to $2)

CHAOS Tournament - is your opportunity to go through the new military adventure in the sky, but in an even more rigorous and competitive environment. If you are an experienced pilot - test your fighting skills, fighting on the rigid rules of our tournaments with those who already have significant experience in the management of helicopter gunships. If you're new - prove that you are a rising star, or ... or fall from the sky.
The motto of the CHAOS Tournament: In the sky, there will be only one!
Characteristics:
- Prizes
- Video of fighting for the analysis and preparation for combat available
- 2 types of tournaments: regular (includes 3 leagues) and elite (for seasoned fighters)
- The integration of games with Game Center and Facebook
- Realistic helicopter simulator and game play, rich with action and events
- Highly detailed helicopter models from leading manufacturers including the U.S., Russia and Europe (AH-64 "Apache", UH-60 "Black Hawk", MI-24 "Hind", Ka-52 "Alligator", RAH-66 "Comanche") and other
- Unique visual and sound effects
- Real maps and battle locations
- 8 training missions, you can prepare for the air fight by passing training missions
- Ability to improve performance and upgrade weapons for your helicopter
- Medals and orders for the professionalism displayed in battle
- Detailed statistics combat achievements, which is available both in game and on the website
Add friends, participate in tournaments, improve combat skills in between tournaments in training missions and online battles, and win awards and titles.
Detailed schedule of the tournaments can be found on the website or on http://chaos-game.com http://facebook.com/groups/chaosgame/ - watch the updates of the schedule.

Discover the arcade game you must have. Control a rolling paper ball in this hauntingly beautiful arcade game. The mighty god of wind, Eole, blows a steady stream of air at your back. You cannot stop it, but you can slow your progress enough to navigate obstacles in your way. Tilt your device left to struggle against mighty Eole's breath, and…

An arcade helicopter game. If there's something where simulator players and arcade hardcore gamers meet, it must be helicopter games, like this Gunship Battle. Although closer to Afterburner or any other third person air shoot'em-up, as you have to follow a predetermined path, it's a fun experience, and difficulty is pretty well balanced. 3D Graphi….