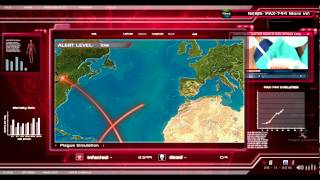 New Ultimate Board Games scenario
Make a best-selling board game in this radically different scenario that has nothing to do with disease!

New Science Denial scenario
People around the world have stopped believing in science, medicine and even diseases.

"That's how started it all...cough"

Without further ado: select the country or region where your first "patient zero" is living, preferentially a well communicated by seaports and airports one but with poor healthcare and an inefficient government. When you start you are a simple and innocuous wanna be disease, but you have DNA points to spend and evolve into something like a flu.

Well, flu is what your government would say. You know you aren't a common flu. People will start to figure out that it (you) are something worse. However, if you have infected enough people you will have more DNA points to evolve faster than their efforts to protect themselves and fire a cure. That's the game: a strategy race in which you have to infect the more the better and evolve and change so any hidden lab can't find how to get rid of you and restore mankind its place as the dominant species on Earth. Meanwhile, governments will lock down airports and close borders, but you can always evolve into a stump air-transmitted, or spend your points in less obvious symptoms and be transmitted through birds or whatever.

It's quite hard to explain how Plague Inc works, but it's really easy and fast to be learnt, it has a nearly infinite replayability. It starts somehow slowly, as all great things do, but when it gets out of hand a few minutes later, this mix of "Sim Virus" and real time puzzle becomes what it actually is: one of the most surprising, amazing and recommendable games for any mobile device.

To cap it all, it's free. Ad supported and with in-app purchases, yet free. In-app purchase system serves to boost your progress and help MiniClip.com and Endemic Creations, whom we are grateful for bringing this awesome jewel, though these upgrades can be obtained by mere playing. A 5/5, even when we'd like it was translated to more languages beside English, more spectacular graphics, , and cutscenes taken from live news and overall a more cinematographic scenery. Cough. Now, if you excuse me...cough, cough.

Can you infect the world? Plague Inc. is a unique mix of high strategy and terrifyingly realistic simulation.

Your pathogen has just infected 'Patient Zero'. Now you must bring about the end of human history by evolving a deadly, global Plague whilst adapting against everything humanity can do to defend itself.

Brilliantly executed with innovative gameplay and built from the ground up for touchscreen, Plague Inc. from developer Ndemic Creations evolves the strategy genre and pushes mobile gaming (and you) to new levels. It’s You vs. the world - only the strongest can survive!

Plague Inc. is a global hit with over half a million 5 star ratings and features in newspapers such as The Economist, New York Post, Boston Herald, The Guardian and London Metro!

The developer of Plague Inc. was invited to speak at the CDC in Atlanta about the disease models inside the game!

“The game creates a compelling world that engages the public on serious public health topics” – The Centers for Disease Control and Prevention
“Best Tablet Game of 2012” - New York Daily News
“Plague Inc. will snag your attention in all the right ways and keep it there” - Touch Arcade
“No denying Plague Inc.'s high-level of quality” - Modojo
“Plague Inc. should not be as much fun as it is” – London Metro
“Will leave you hoping to destroy the world, all in the name of a bit of fun” – Pocket Lint
“Plague Inc.'s gameplay is infectious” - Slide to Play
Winner – “Overall Game of the Year” – Pocket Gamer
“Killing billions has never been so fun” – IGN

P.S. Give yourself a pat on the back if you got all the themed literature references!

Special sale price to celebrate being the 15th most popular touchscreen game of 2012!

Pandemic: The Board Game

As skilled members of a disease-fighting team, you must keep four deadly diseases at bay while discovering their cures. Travel the world, treat infections, and find cures. You must work as a team to succeed. The clock is ticking as outbreaks and epidemics fuel the spreading plagues. Can you find all four cures in time? The fate of humanity is in y…

Bio Inc is a biomedical strategy simulator in which you determine the ultimate fate of a victim by developing the most lethal illness possible. Create your own plague by upgrading diseases, boosting risk factors and slowing down your victim’s recovery before a team of highly motivated doctors find a cure and save him. Hours and Hours of Awesome…

London Listeni/ˈlʌndən/ is the capital city of England and the United Kingdom, and the largest city, urban zone and metropolitan area in the United Kingdom, and the European Union by most measures. Located on the River Thames, London has been a major settlement for two millennia, its history going back to its founding by the Romans, who named it Lo…

Disease Lab: the most viral game in the world

‘THIS IS… Disease Lab’ is an educational trivia card game for all the family. Designed by actual scientists fighting infectious diseases in real life, 'Disease Lab' will open your eyes to the reality of disease: its burden, the death toll, the risk of pandemic and the progress we've made in fighting each disease. What do you know about…

Enter the lab and develop your own custom scenarios for Plague Inc. with this powerful yet easy to use tool. Create new plague types, worlds, events and more and then share them with friends and over 85 million other players! IMPORTANT - This app is a tool to create custom scenarios for Plague Inc. It is not a game! You need the original Plague I…