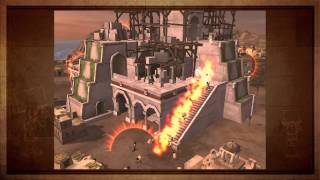 AMA in collaboration with Ubisoft and Mando Production brings the next generation of Babel Rising: Babel Rising 3D.

Differences between both version are evident: first, Babel Rising 3D has been enhanced graphically: it becomes a 3D game with stunning environments and amazing effects. the game runs smoothly in most of the medium/high-end devices. Likewise, multi-touch and motion controls have been optimized for both mobiles and tablets.

What's more, new missions and powers made up by mastering the 4 elements have been introduced in this version. Although core gameplay is still the same (prevent the Babylonians from building the famous Babel Tower), you'll be able to punish infidels with new divine powers which are way more spectacular thanks to enhanced graphics. Attacks based on the elements, each with its unique effect depending on the target: Rolling Stone, Sirocco, Meteorite Shower and many more. There are up to 15 missions to show mortals who rules on Earth.

No ads, no future in-app purchases!

Phones with Adreno 200 video cards are not available.

Your divine intervention will be crucial to resist to the numerous waves of miscreant builders, blasphemer priests or damned urn carriers! Rely on tactics and strategy to achieve the solo campaign and endure an epic survival mode.

There will be no mercy!

Features:
• 3 Brand New Units to bring another quick play experience:
- the Slavers with unmerciful whips,
- the Super Priests with changing shields
- the Super Workers who can continue building a part of the tower if left undestroyed !
• Ishtar Gate: It seems we have taught the humans a lesson: after 3 failures, they have designed the Ishtar Gate as an impregnable fortress. But not for you! The workers may be protected while they build, but their walls won't spare them the wrath of God!
• Nabu's Tower: The pinnacle of human arrogance - a giant statue of their leader! This act of defiance cannot go unpunished... While higher than any tower built before it, at least it lets you obliterate that smile from Nabu's face!
• The world’s best 3D graphics available on mobiles and tablets for an epic gaming experience.
• Punish pretentious Babylonians through 15 missions in the single-player campaign and test your Godly stamina in the survival mode.
• Master the 4 elements of fire, air, earth and water, each having specific powers.
• Help your fight with passive powers and divine parchments.
• Optimized controls for mobiles and tablets with a multi-touch and motion controlled gameplay to easily crush mankind.

A dynamic defense game. Rock Stars vs Paparazzi is a defense game more oriented to real-time tactics rather than strategy and be sat waiting for your "towers" to do their job. Your star uses his fame to invoke fans with different abilities and access to different weapons to fend off paparazzi and their army of camera drones trying to get pictures o….

Yeti On Furry is a casual defense game in which players must protect Yeti from greedy climbers. The climbers have been attacking Yeti's mountain for ages and he always managed to keep them away. However, he's getting old and retiring just after the game starts. Now, Yeti's Junior must keep the legacy and keep the mountain spotless. With your help,….