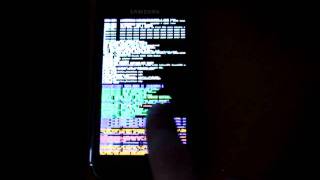 live dmesg is the one and only boot animation replacement that shows the actual dmesg log (kernel debug messages). It looks a bit similar to a BIOS boot. Handy for developers too! Unlike other similar apps, the information you see on screen is real and live, not a pre-recorded fake.

The paid version price is aimed at being "one beer" (at the bar, not the supermarket). Google does the price conversion, but if it comes out way above that in your area, let me know.

The paid version adds features to hide the copyright notice, enlarge the text size, and rotate the display. For the ultimate geekgasm, get the paid versions of both live dmesg and live logcat, and display both in split screen mode during boot. In that case you can also switch between the three modes during boot by tapping the screen.

The application uses some (root) trickery to get itself installed and running, and it may not be compatible with all devices. It also requires writable /system in many cases ("S-OFF"). It has been tested and found working on the following devices (though it may not work on all firmwares and kernels for a specific device):

It is likely to work on many more devices, if you use a non-listed device and it works, please leave a comment! Note that it will never work on ALL devices, so please don't just rate it 1-star if it doesn't work for you.

The Angels are everywhere and always willing to help you. You only have to ask. Relax, breath deeply in and out and ask what is important to you here and now. Get your message by a tap on the Angels painting. The Angels will give you the right answer immediately. This app consists of 52 inspiring Angelic messages. They are illustrated by beautifu…

SD Maid is a system cleaning tool app only for ROOTED devices. Without root, functionality is limited given that SD Maid won't have access to all necessary directories. Even if got a rooted devices, use it at own risk. This is a Android system cleaner that cleans even the most remote corners. And that's necessary because sometimes, when you uninsta….

The Chemistry application allows you to find chemical reactions and to solve the chemical equations with one or multiple unknown variables. You'll always have Mendeleev's Periodic Table and Solubility table handy! And even the calculator of Molar Masses is now on your phone! The app can find the equations of chemical reactions even if the…

Talk with Emily the talking Baby. She answers with her funny voice and reacts to what you say or your touch. With a lot of exciting inside games. If you like talking games or sweet baby girl games in general you will love Talking Emily Baby! Enjoy hours of fun and laughter with this talking and free virtual baby app! If you like Talking Emily Baby…

**** TO USE THE FIRST ALLEGIANCE ANDROID APPLICATION YOU MUST HAVE AN FIRST ALLEGIANCE CONTRACTOR ACCOUNT. VISIT WWW.FIRSTALLEGIANCE.COM TO REGISTER AS A CONTRACTOR.**** The First Allegiance website is now in the palm of your hands. Let your Android phone become your new assistant and submit photos and forms, in real-time and right from the proper…