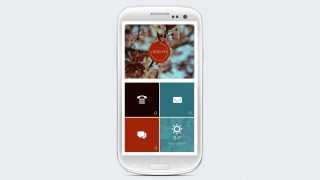 Themer is a launcher that contains dozens of mycolorscreen.com-based themes.

"Take customization to the lmit"

One of the strongest points of Android is customization. However, customization can certainly be a time-consuming thing.

If you are one of those who love changing the phone's appearance but don't do it often because you can't (or don't want) to dedicate too much time to it, Themer is the solution you were looking for.

Themer is nothing but a themed-based launcher. It lets you transform your homescreen making it more beautiful, functional and personal. It allows users to download and apply beautiful themes in a few taps. It makes really easy switching from one theme to another.

Changing one theme means changing the homescreen and app drawer appearance, as well as the wallpapers and icons. A full revamping happening as often as you like to.

In addition, you can customize at your whim the number of homescreen, change wallpaper, add apps/widgets to the homescreen (RSS, Weather...), set themer actions.

Themer is developed by mycolorscreen, the well-known developer of the Android theme-based social network (mycolorscreen.com) where users can upload screenshots of their phone's homescreen and a brief guide of the apps they use to set it that way.

Themer features a compilation of the most popular, trending and newest themes from mycolorscreen.

*As seen on The New York Times, CNET, WIRED, Lifehacker, and XDA-Developers*

Themer is the ultimate Homescreen replacement app. Flip through our extensive library of free, premium themes, each complete with icons, wallpapers, widgets, and more. Your phone will instantly look amazing and feel brand new with minimal effort. Just hit "Apply" and everything is set up for you. We have themes that are minimal, colorful, exotic, and beautiful.

Themer also makes your phone smarter with Smart Categories that auto-categorize your apps, making them easier to find and launch. Other features include a completely customizable app drawer (with your choice of a dark or light theme) and full integration of Zooper Widget Pro allowing for the utmost in customizability.

"Themer feels like a magic trick." -The New York Times

"Themer will make your Android phone look amazing... Both attractive and functional." -WIRED

"My phone looks better than it ever has and I didn't even have to do anything but press a couple of buttons. If I had to recommend any application to try out right now, this would be the one." -PhoneDog

Features:
- All themes are free.
- Icon pack support.
- Over 300 premium themes to choose from: Card UI, Nature, Space, Bollywood, and many more.
- Easily go back to your old homescreen--though we doubt you'll want to!
- All themes are customizable, or you can use them as they are.
- Themer Actions learn your app preferences. It doesn't matter if you're using Pandora or Spotify for music, or WeatherBug or AccuWeather for weather. Themer will learn what you like and always get it right.

If you want some help, contact our excellent support team at http://support.themerapp.com.

By the way: Themer is still in beta, which means that we are working hard to fix bugs, improve performance, add new features, and increase compatibility with more devices. Thanks for your patience and support.

uPod is the new full featured podcatcher for Android with full cross device synchronization. Besides other unique features like the innovative handling of new episodes (inbox concept) and its beautiful cover art focused Android 4 design you will find nearly everything you expect from a podcast player today. This trial version provides you full ac…

Gotta Catch 'Em All It's time for something original. No long shadows, no 100% icon mask. I introduce to you, Poké Want to bring back some life into your device? Look no further. Poké aims to achieve the same old look of that classic pokéball, but of course, being able to theme your applications. This idea grew into something much larg…

*****YOU MUST HAVE ZOOPER WIDGET PRO INSTALLED OR THESE WIDGETS WILL NOT SHOW UP!***** Inspired by the popular forum: http://forum.xda-developers.com/ • Zooper Popup 1: http://goo.gl/hP74qw • Pro version here: http://goo.gl/fOPBMS Added all pro widgets to celebrate paying off my developer account! xdaZooper Pro contains 14 widgets to make a numero…

Make your friends jealous! Give to your phone an unique look easily! A full set of widget, wich include clock, date, battery, shortcuts, weather, notifications... everything you need on your homescreen, with elegance. Fully customizable colors! Install application. Open the app. Install the skin. Create a new UCCW widget. Search Shades widgets o…